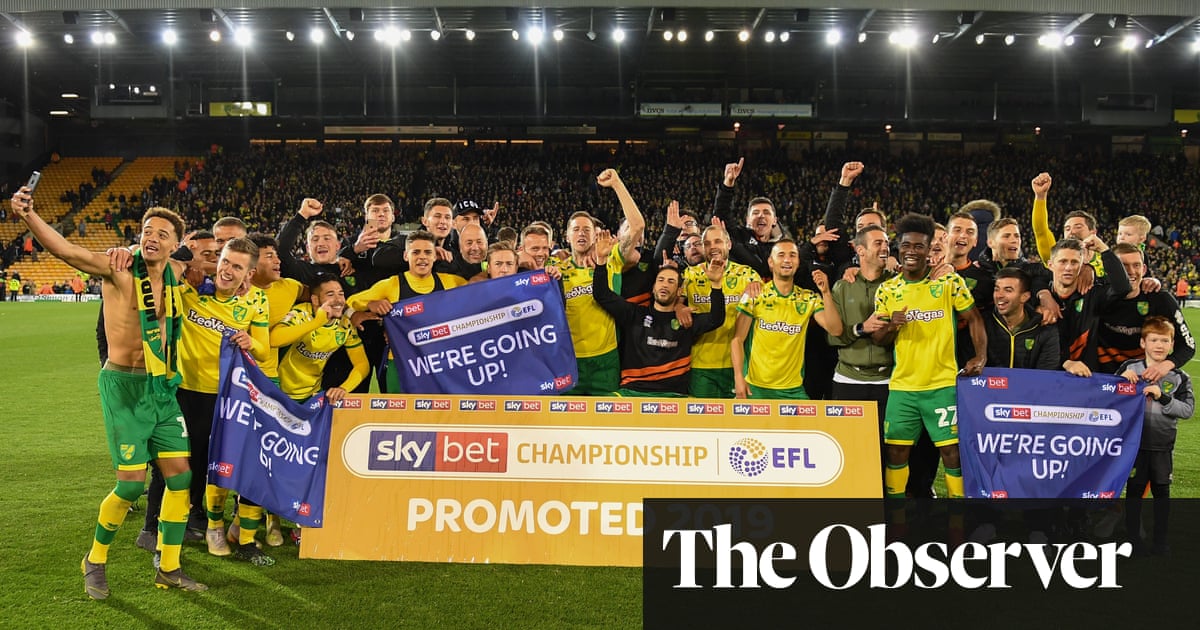 Norwich confirmed their return to the Premier League with a swagger, winning here with the brio that has become the leitmotif under their German manager, Daniel Farke. They will go up as title winners if they earn a point or more next Sunday at Aston Villa. Not that Farke was thinking about that immediately after a promotion he described as “a sensation and a miracle”.

Nor was his mind on the daunting challenges that await next season. “I don’t want to be too scared so I’m not thinking about Pep Guardiola or Jürgen Klopp’s side,” he said. “Today I’m just interested in celebrating. Even if the rest of the club wants to go to bed, I will celebrate on my own.”

Some chance. Farke is the toast of Norwich now. It is a far cry from earlier in the season, when some fans wanted rid of him after one win from the first six matches following last season’s ho-hum 14th-place finish. The faithless did not get their wish and instead Farke demonstrated the benefit of giving a good manager time to cultivate a fluent team.

Norwich’s rise is not the result of a cash injection, instead a reward for talent, audacity and intelligence – and all while slashing their budget. Their slick play is performed by a mixture of homegrown youngsters and bargain signings, such as Teemu Pukki, who arrived for free last summer and has since plundered 28 league goals. Norwich’s slick, energetic passing and movement make them not only devilishly hard to play against but divine to watch.

“It’s a little miracle that we could promoted under these circumstances, with financial pressure and these young lads,” said Farke. “This achievement, in the style we achieved it, is really extraordinary. It’s a fantastic effort for this club that was in a really difficult situation. All the credit goes to our board. We had to earn so much money to keep this club running. They were brave enough to change their approach to reach their targets.”

Before this match there was still a risk that promotion would elude Norwich, albeit through a freakish series of results. Nerves, however, can play havoc with even the most accomplished sides. Farke admitted that some of his younger players have had trouble staving off jitters in recent weeks, partly explaining why the team had stuttered to draws in their previous four matches. Meanwhile, Blackburn arrived in carefree mood, with nothing to play for here but the mischievous glee of sabotaging Norwich’s party plans.

A capacity crowd at Carrow Road was giddy with optimism before kick-off. Norwich, as is their custom, attacked from the first whistle. Blackburn battened down the hatches and hoped the storm would pass. Their luck ran out in the 13th minute. Mario Vrancic, first to a loose ball after a shot by Onel Hernández was blocked, teed up Marco Stiepermann, who rammed a low effort into the net from 20 yards.

Rovers caught a break in the 18th minute when the referee decided to show Darragh Lenihan only a yellow card after the defender resorted to a desperate hack to stop Pukki from running through on goal. Vrancic meted out punishment himself. Allowed to size up a shot from 25 yards, the Bosnian tonked a ferocious effort past Jayson Leutwiler and into the net. There was no stopping that.

Norwich looked unstoppable until Lewis Travis surprisingly found the net from 20 yards from Blackburn’s first attack. His low curler rolled towards goal like a bowling ball towards a jack, and the 31-year-old Tim Krul creaked like a man three times his age as he slowly lowered himself towards it in a feeble attempt to save.

Norwich 2-1 Blackburn: Canaries promoted from Championship – as it happened

Leutwiler had to be sharper moments later to thwart Stiepermann after a pull-back by Pukki. By the interval Norwich were halfway to where they wanted to be – but not quite close enough for comfort.

Straight after the break they went about pursuing the goal that would chase away any lingering doubts. Emi Buendía almost produced it with an overhead kick from eight yards but Leutwiler foiled him. Then Hernández went close, skittering in from the left and curling a shot from 18 yards against the crossbar.

Norwich never did get a third goal and even had to defend late on as Blackburn rallied, but it did not matter. They have done more than enough this to justify their return to the elite.