The historic 2021 US Open that saw two new first-time Grand Slam champions etch their names into tennis’ history books will be an inspiring story of tennis history forever preserved at the International Tennis Hall of Fame. Champions Daniil Medvedev and Emma Raducanu each gifted items from their major victories to the permanent collection in the Hall of Fame’s Museum.

Moments after Medvedev’s win over world No. 1 Novak Djokovic, the first-time grand slam champion handed a racquet from the championship match over to ITHF President Stan Smith. Raducanu gifted the Hall of Fame the Nike kit that she wore in her magical two weeks in New York.

Donated one of my rackets to the @TennisHalloFame. Good home for it! Nice to chat to another legend as well #StanSmith pic.twitter.com/Mz50wUaBhm

The racquet and outfit are now displayed in the Museum for tennis fans to enjoy. As part of the permanent collection, the pieces will also be photographed for use in future digital exhibits and educational content produced by the Museum.

“The International Tennis Hall of Fame preserves tennis history so that future generations can learn from and be inspired by the sport’s most notable moments and remarkable people. Emma and Daniil certainly showed that they are those remarkable people during their spectacular US Open title runs. We are grateful to Emma and Daniil for recognizing the importance of the Hall of Fame’s mission to preserve tennis history for future generations and for providing this special piece of tennis history to the museum,” said Stan Smith, ITHF President.

Pieces of 2021 @usopen glory live on at the ITHF! @DaniilMedwed‘s title-winning racquet and the kit @EmmaRaducanu wore during her magical fortnight are now on display in Newport ✨

With a straight sets win, Medvedev captured his first major title with an victory over world No. 1 Novak Djokovic, denying Djokovic’s quest for the calendar-year Grand Slam. Medvedev became the first man since Rafael Nadal in 2010 and the second since Ivan Lendl in 1987 to drop just one set en route to the US Open title. In lifting the trophy, Medvedev became the third man in Russian tennis to win a major title, joining the ranks of Hall of Famers Marat Safin and Yevgeny Kafelnikov.

Raducanu, 18, became the first qualifier to win a major. She did so without dropping a set the entire tournament, winning 20 sets en route to the final.

She clinched the trophy with a straight sets win over fellow teen sensation, Canadian Leylah Fernandez. Raducanu became the first Britain to win a major title since Hall of Famer Virginia Wade in 1977. Her historic victory elicited enthusiastic support from around the world, topped off with a personal note from Queen Elizabeth. 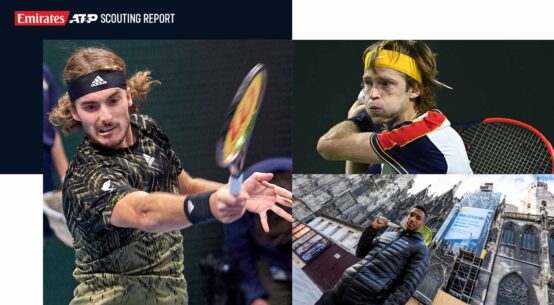