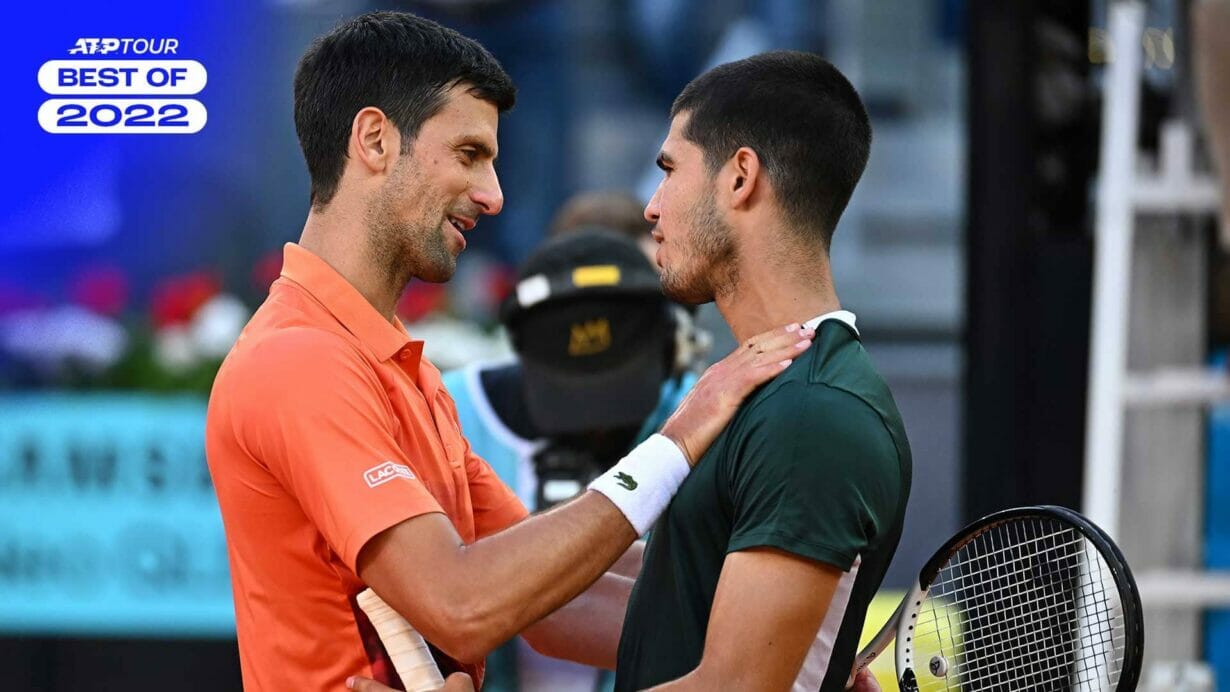 This week, ATPTour.com begins its annual season-in-review series, looking back at 2022’s best matches, biggest upsets, most dramatic comebacks and more. We start by looking back at the best matches on the ATP Tour this season (excluding the Grand Slams), featuring World No. 1 Carlos Alcaraz, Rafael Nadal and Novak Djokovic. On Tuesday we will focus on the best Grand Slam matches of the year.

5) Miami Open presented by Itau, QF, Alcaraz d. Kecmanovic 6-7(5), 6-3, 7-6(5)
In a standout season, Carlos Alcaraz frequently lit up the ATP Tour with his all-court, expansive game. One of his best performances of the year came en route to his maiden ATP Masters 1000 crown in Miami, where he clawed past Miomir Kecmanovic in a thrilling quarter-final clash.

The 19-year-old Alcaraz was two points from defeat at 4-5, 15/30 in the third set and again at 3/5 in the third-set tie-break, where he twice trailed by a mini-break. But he was brave and bold at the crucial moments, combining explosive power with the effective use of the drop shot. Alcaraz’s imprint on the match was highlighted by his 52/40 winners-to-unforced-errors count as he looked for every opportunity to attack. Kecmanovic, who did his best to keep his opponent on the back foot, registered a 19/16 mark.

“I’m trying to hit the ball hard to push the opponent off the baseline,” Alcaraz said of his tactics. “The drop shot is good for me. I have confidence with that shot. In the tough moments, you have to hit the best shots that you have.”

The Spaniard’s aggressive strategy paid off in the third-set tie-break as he won the final four points of the match, sealing the deal spectacularly with a pushed passing shot on the dead run.

Kecmanovic arrived in Miami off the back of a quarter-final run in Indian Wells. Despite his defeat, Kecmanovic demonstrated his high confidence levels against Alcaraz, firing the ball off both wings to push the Spaniard all the way.

4) Rolex Paris Masters, SF, Djokovic d. Tsitsipas a 6-2, 3-6, 7-6(4)
Novak Djokovic entered his semi-final against Stefanos Tsitsipas at the Rolex Paris Masters having won his past 12 matches, lifting trophies in Tel Aviv and Astana in October. With a spot in the final on the line, the Serbian made it 13 straight wins, but only just.

Aiming to keep alive his hopes of capturing a record-extending 39th ATP Masters crown, Djokovic produced a high-quality performance to improve to 9-2 in his ATP Head2Head series against Tsitsipas at the time.

Djokovic fired 36 winners and 12 unforced errors and won 84 per cent (41/49) of his first-serve points, not facing a break point in the first or third set.

In a 6-2, 3-6, 7-6(4) victory, the Serbian won the final four points of the match after falling behind by a mini-break in the decisive tie-break. Serving at 5/4 in the third-set tie-break, Djokovic scrambled from corner to corner to survive a point Tsitsipas seemed to have won twice over. Djokovic then fired down a serve to seal his victory after two hours and 22 minutes.

Tsitsipas was aiming to gain revenge against Djokovic, having lost to the Serbian in the Astana final. However, the 24-year-old, who was seeking his third ATP Masters 1000 title, was unable to handle the pressure moments and earn his first victory against Djokovic since Shanghai in 2019.

“It’s very sweet when you win matches like this against one of the best players in the world,” Djokovic said after the victory.

With a record seventh Paris title on the line, there was to be no fairytale end for Djokovic, though, with the former World No. 1 losing to #NextGenATP Dane Holger Rune in the championship match.

3) Hamburg European Open, Final, Musetti d. Alcaraz 6-4, 6-7(6), 6-4
In a battle between two #NextGenATP stars, Lorenzo Musetti produced a performance full of quality and fight to claw past Carlos Alcaraz and capture his first ATP Tour title at the Hamburg European Open. The Italian arrived in Germany having lost six consecutive tour-level matches and was on the brink of a seventh straight defeat in his opening match at the ATP 500 event against Dusan Lajovic. However, Musetti stayed alive, saving two match points against Lajovic in a victory that changed his fortunes.

Boosted by his win, the 20-year-old then overcame Emil Ruusuvuori, Alejandro Davidovich Fokina and Francisco Cerundolo to set a final meeting against Alcaraz.

In a match that swung one way and then the other, the Italian let slip two championship points while serving for the match at 5-4 in the second set and then another three in the ensuing tie-break as Alcaraz battled hard to level.

However, rather than letting his missed chance deflate him, the 20-year-old continued to push. Musetti played aggressively from the baseline, moved into the net when given the opportunity and kept the now-six-time ATP Tour titlist off balance with plenty of variety in spin and pace.

Alcaraz was not at his flying best in the championship clash, making uncharacteristic errors. But that was in part because his opponent kept him guessing and he was unable to find rhythm, with Musetti sealing his memorable win when the 19-year-old Alcaraz missed a backhand long. The Italian sank to the clay in celebration following his two-hour, 47-minute win.

“Of course I was really upset, but I tried to not show my opponent my reaction. I tried to forgive [myself for] all the match points and all the points [when] I couldn’t do it,” Musetti said. “I think that was the most [important] thing, even for me, because I didn’t expect the win after all this roller-coaster, so I’m super happy to be here and to be the champion.”

2) Mutua Madrid Open, Third Round, Nadal d. Goffin 6-3, 5-7, 7-6(9)
Rafael Nadal has often produced his best level at Mutua Madrid Open, winning the ATP Masters 1000 title four times since the event transitioned from hard courts to clay in 2009. However, the Spaniard was forced to dig deeper than ever during his third-round meeting against David Goffin in the Spanish capital.

After coming through a tight first set, Nadal looked on course for a routine victory when he led 5-3 in the second, attacking with more pop and precision on his groundstrokes to move clear. But as the Spaniard’s game slightly dipped at closing time, Goffin played some of his best tennis of the match to extend the contest, winning 53 per cent (8/15) of points on Nadal’s second service in the set as he saved two match points, claiming four straight games to level.

Goffin then fended off danger at the start of the third set, saving two break points as Nadal’s patience was tested. With both strong on serve, the set moved to a tie-break, when Nadal erased four match points himself, saving two with drop shots, and a third when the Belgian netted a short forehand from an attacking position. The former World No. 1 eventually advanced by the finest of margins, 6-3, 5-7, 7-6(9), in three hours and nine minutes.

1) Mutua Madrid Open, SF, Alcaraz d. Djokovic 6-7(5), 7-5, 7-6(5)
After defeating Rafael Nadal in the quarter-finals, Alcaraz made it consecutive victories over ATP Tour legends when he overcame World No. 1 Novak Djokovic in his only meeting to date with the Serbian.

Alcaraz struck 51 winners to Djokovic’s 24 as his aggressive style and consistent use of drop shots caused Djokovic constant problems in the pair’s maiden ATP Head2Head meeting. The Spaniard won 72 per cent of points from an offensive position and 41 per cent of points from defensive ones, outscoring Djokovic in both departments. Alcaraz also proved steely under pressure in saving five of six break points he faced, with Djokovic saving eight out of 10 as both players frequently found big serves to dig themselves out of trouble.

Alcaraz raced out of the blocks at the start of the match, pinning Djokovic back with a barrage of forehands to earn a break in the opening game. The Serbian’s response was emphatic, though. From 40/15 in the third game, Djokovic won 21 successive points on serve and reclaimed the break in the eighth game. He carried that momentum into the first-set tie-break, opening up a 5/1 lead that proved unassailable.

Alcaraz remained in touch with Djokovic in the second set and used his drop shot to increasingly good effect, using the tactic on set point as he angled a perfectly placed winner past the Serb after dragging the former World No. 1 forward. He then sealed his statement win in a third-set tie-break, triumphing 6-7(5), 7-5, 7-6(5).

“I don’t know what the difference [between us] was,” said Alcaraz after his three-hour, 35-minute win. “It was so close. He had the chances to break my serve at the end of the second set. In the first set as well it was so close in the tie-break.”

Alcaraz would go onto follow in the footsteps of Djokovic at the end of the 2022 season when he became the youngest year-end ATP No. 1 presented by Pepperstone in history (since 1973). Djokovic secured the year-end No. 1 in the Pepperstone ATP Rankings for a record seventh time in 2021. 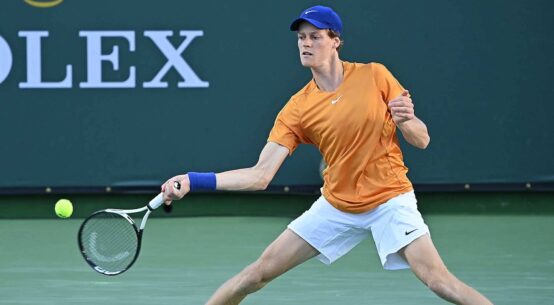 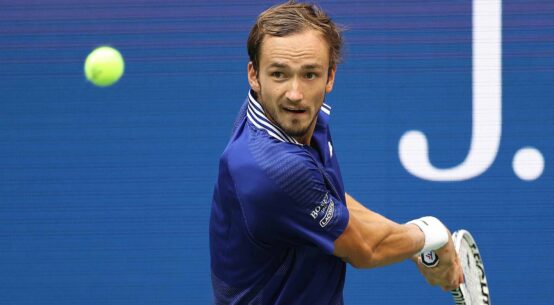 Kafelnikov’s Advice For Medvedev Before US Open Final vs. Djokovic 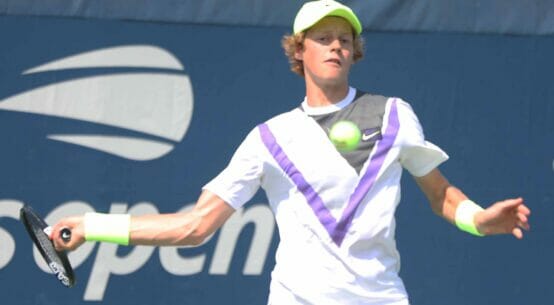 Sinner: ‘I Dont Want To Rush Myself’