Second-round singles play begins Wednesday at Roland Garros, with the men’s draw having been whittled down to 64 competitors over the course of the past three days. With the loaded top half of the tournament bracket in action on Day 4, marquee matchups are spread around the grounds in Paris.

The lone previous meeting between Djokovic and Alex Molcan came in the Belgrade 2 final last May, a 6-4, 6-3 win for the Serbian in his home city. Molcan, who qualified into that Belgrade main draw, was at No. 255 in the Pepperstone ATP Rankings at the time; he’s since risen to a career-high of No. 38 after reaching two more clay-court finals in Marrakech (early April) and Lyon (last week). The 24-year-old earned his first Top 10 win in Marrakech when he beat Felix Auger-Aliassime in a third-set tie-break.

The Slovakian is coached by countryman Marian Vajda, who worked with Djokovic for 15 years before the pair amicably ended their partnership following the 2021 Nitto ATP Finals. Molcan, who beat Federico Coria in four first-round sets, is also coached by Karol Beck.

Vajda was a part of Djokovic’s team for all 20 of his Grand Slam title runs and began working with the Serbian in 2006. They briefly split in 2017 but reunited in 2018. The Slovakian’s wealth of knowledge about the World No. 1 adds an intriguing subplot to this second-round matchup, with Molcan sure to lean on his new coach as he strategises for his upset bid.

Djokovic was sharp in his Roland Garros opener Monday, overcoming a bright start from Yoshihito Nishioka to ease through in three sets. The Serbian appears to be peaking for Paris following his Rome title run. He has now won six straight matches and 13 straight sets.

“I have been feeling very well on clay in the last three, four weeks, of course,” Djokovic said after beating the Japanese. “Excited to bring out intensity on the court and compete with the guys. I’m happy to be back. Roland Garros is one of the biggest tournaments in the world, and the memories from last year still are fresh in my head, in my mind. It was nice to be back on the centre court.”

The Serbian is aiming to continue his stellar record as the top seed in Paris, a distinction he holds for the fourth straight year and eighth overall. He has never lost before the semi-finals as the top seed, including his title runs in 2016 and 2021.

It’s great to be back 😃 #RolandGarros

Countrymen Alcaraz and Albert Ramos-Vinolas meet on clay for the third straight year, with the sixth seed 2-0 in their ATP Head2Head series. Alcaraz won a three-setter in Rio de Janeiro in 2020 (he won the Rio title this season) and took a straight-sets decision on his way to the Umag title in 2021, the first of his now five trophies on the ATP Tour. Three of the five sets they’ve played have gone to tie-breaks, with the 19-year-old winning all three.

Alcaraz brings an 11-match win streak into the second round after his Spanish trophy double in Barcelona and Madrid. Playing in his second Roland Garros, Alcaraz justified his status as a tournament favourite by racing past Juan Ignacio Londero, 6-4, 6-2, 6-0, in the opening round on Sunday.

“It was difficult at the beginning, but it’s always special to play in such a great stadium, a great court,” he said of his Chatrier debut. “I’m really happy with the performance in my first match in Philippe Chatrier, and hope to play more matches in this court.”

Alcaraz improved to 29-3 on the season with the victory, his 29 match wins trailing only Stefanos Tsitsipas this year on the ATP Tour, as shown in the chart below.

The Spaniard can improve upon his 2021 third-round run with two more victories this fortnight; he reached the last 32 as a qualifier one year ago before falling to Jan-Lennard Struff in his Roland Garros debut.

Ramos-Vinolas’ best result on the European clay swing was a semi-final showing in Estoril, where he lost to eventual champion Sebastian Baez in three sets. He entered Paris on a four-match losing skid but rebounded to defeat Thanasi Kokkinakis in four sets on Monday. The 34-year-old, who reached a career-high of No. 17 in the Pepperstone ATP Rankings in 2017, won his fourth tour-level title in February in Cordoba. All four of his titles have come on clay (Bastad 2016, Gstaad 2019, Estoril 2021).

Corentin Moutet defeated one former Roland Garros champion to earn a chance to play another — the tournament’s ultimate legend in Nadal. The French wild card beat 2015 champ Stan Wawrinka in four sets on Monday and will now seek to shock the fifth seed on Chatrier.

“Rafa, it’s my dream,” Moutet said of the all-lefty matchup. “He’s no longer my idol because now I’m on the Tour, but I started playing tennis while watching him. I remember his first Grand Slam. I even imitated him when I was a kid.

“[In 2019], I played Juan Ignacio Londero [at Roland Garros] to potentially play Nadal in the next round, but I missed that occasion, so I was always thinking about that. it’s a great pleasure to be able to play him on centre court or any other court.”

You May Also Like: Moutet On Nadal Clash: ‘It’s A Chance That I Deserve’

Nadal breezed past Aussie Jordan Thompson on Monday, looking physically strong after his chronic foot injury hampered his movement in a Rome defeat against Denis Shapovalov.

“It is a good start, of course, straight sets,” he said after the match. “That’s it. I played good for a while. Then [there are] things that I could do better and I need to do better. But it is a positive start, and that’s given me a chance to have one more day of practice tomorrow and then another chance after tomorrow.”

The Spaniard pointed to his movement and the speed of his forehand as particular areas for improvement. His match against Moutet will be just his seventh clay-court contest this season, as he missed the start of the European swing with a rib fracture before compiling a 3-2 record at the ATP Masters 1000s in Madrid and Rome.

Best Of The Rest

Third seed Alexander Zverev has a tough second-round matchup against Argentina’s Sebastian Baez, who enters with a career-high Pepperstone ATP Ranking of No. 36. Baez won his first tour-level title in Estoril on 1 May and got past Dusan Lajovic in four sets on Monday. But Zverev will also bring great form onto Chatrier, having reached one final and two additional semi-finals in the three recent clay ATP Masters 1000s. The German beat Baez in straight sets two weeks ago in Rome and cruised past Austria’s Sebastian Ofner in Paris on Sunday.

Auger-Aliassime earned his first win in three Roland Garros main-draw attempts by coming back from two sets down against Peru’s Juan Pablo Varillas on Sunday. The Canadian seeks to continue his run of reaching at least the quarter-finals in each of the past three Grand Slams.

Norrie won three straight three-setters to win the Lyon title on Saturday — his fourth tour-level title and second of 2022 — then eased into the Roland Garros second round with a straight-sets win over France’s Manuel Guinard.

In doubles action, Herbert/Mahut begin their title defense against the Belgian pairing of Sander Gille and Joran Vliegen, with that matchup closing play on Court 9. Top seeds Ram/Salisbury face Marcos Giron and Soonwoo Kwon in the Court 12 nightcap, while Kevin Krawietz and Andreas Mies return as a duo for the first time since winning back-to-back titles in 2019 and 2020 with an opening match against Lloyd Glasspool and Harri Heliovaara. The Germans could not defend their title last season and Mies was absent with a knee injury. Krawietz reached the 2021 quarter-finals with Horia Tecau. Steady As He Goes: Carreno Busta Survives In Five Against Shapovalov 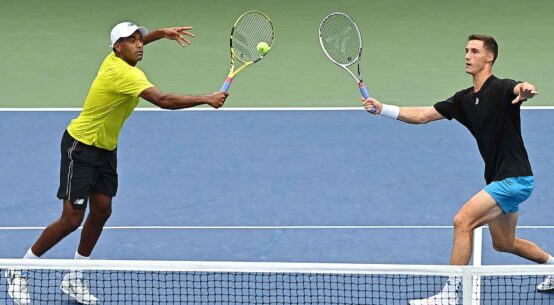