Skip to content
You are here
Home > Tennis > Djokovic: Dominant Win ‘Gives Me Reason To Believe’

Novak Djokovic’s straight-sets win against Alex de Minaur on Monday answered some big questions related to the Serbian’s 2023 Australian Open title bid. Not just for those watching on as he dismantled the home favourite on Rod Laver Arena, but also for the nine-time champion himself.

“A week ago I didn’t really think about the title, I just thought about being in a good enough condition to play the next match,” acknowledged Djokovic after easing past De Minaur 6-2, 6-1, 6-2 in two hours and six minutes. “Until tonight. Tonight, the way I played, the way I felt, gives me reason now to believe that I can go all the way.”

Djokovic sustained a left hamstring injury en route to lifting his 92nd tour-level title at the Adelaide International 1 earlier this month, and he appeared to be affected by it at various times throughout the opening three rounds at Melbourne Park. That was not the case against De Minaur on Monday, when he moved with freedom throughout his imperious win.

“I always believe I can go all the way in terms of my tennis,” said the nine-time Australian Open titlist. “But the way my leg felt before tonight wasn’t giving me too many hopes, so to say, for the entire tournament, to go all the way through. Tonight, I feel that, so I feel positive about it.”

You May Also Like: Djokovic Dispatches De Minaur, Remains On Track In Melbourne

Djokovic delivered a near-flawless performance on Rod Laver Arena, with De Minaur later calling it ‘Novak very close to his best’. The 35-year-old, who will return to No. 1 in the Pepperstone ATP Rankings should he lift the trophy in Melbourne, was reluctant to get too carried away with his display but acknowledged it as his best of a 2023 season in which he now holds a 9-0 record.

“I don’t know [if it was the best] ever, but definitely the best tennis I’ve played this year, this tournament, so far this season,” said Djokovic. “[The] best match. I’m really glad because obviously as the tournament progresses, the matches are going to get tougher. I’m really glad to manage to win the way I did tonight.”

Djokovic possesses by far the most Grand Slam experience of the eight players left in the draw at Melbourne Park. Aside from the Serbian, only 2021 Roland Garros finalist Stefanos Tsitsipas has reached the champiobnship match at a major, while Karen Khachanov is the only other player to have reached a semi-final. Yet the fourth seed is taking nothing for granted as he bids to draw level with Rafael Nadal’s record tally of 22 Grand Slam titles.

“Being the only guy remaining in the tournament that has won a Grand Slam, of course [that] flatters me, but I don’t think it’s going to make too big of a difference, to be honest,” said Djokovic. “Maybe it will to some extent for me, but maybe not for the other guys.

“I know Tsitsipas, for example, probably the most experienced guy out of all of them… He’s someone that looks ready to go for the title, and the way he has been playing, he’s been coming closer and closer.

“But you have the other guys, some young American guys, that are doing extremely well at this tournament. Anything is possible, I think. We’ll just have to take it day by day.” 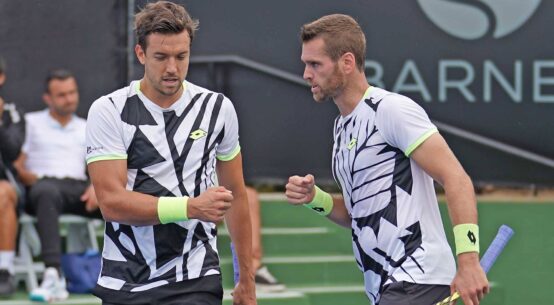 Murray Battles Past Humbert In Metz