Skip to content
You are here
Home > Boxing > From Olympic silver to Usyk-Joshua II undercard, Ben Whittaker has grander ambitions

Ben Whittaker has been absorbing the big fight environment in Jeddah, Saudi Arabia this week, but he is not yet content. He insists one day he will be centre of attention for a world title fight.

Whittaker’s promoter BOXXER secured him a slot on Usyk-Joshua II and the intention is for the light heavyweight to box six times in his first year as a professional. His debut came last month, where he registered a second round knockout victory.

“To be involved in a big fight of this magnitude is great, I can take this fight in, absorb it and see what these fighters go through in world title fights,” Whittaker told ESPN.

“I want to be fighting for these [world title] belts later in my career, to be involved in these sort of big events, so it’s good to see what they are like with the cameras and attention at the media events this week.

“You have to keep your poker face on, I’ve learned. I was training with AJ the other day and he looks ready. He means business.

“I fancy AJ, but not totally, because Usyk is very awkward. AJ has got a lot of energy around him and he looks like he’s up for it, so I’ll say he wins by seventh or eighth round stoppage.”

Whittaker, from Birmingham, England, faces Petar Josic (6-0, 3 KOs), of Croatia, on Saturday, who he beat inside two rounds in 2015.

“The shorter the fight is, the better for me,” Whittaker told ESPN.

“We don’t get paid for overtime. I don’t want to go past three rounds. You can get cut or something the longer it goes on. I fought him as an amateur when we were both youths but it’s different now, he will be trying to get revenge, but I can’t see it going past two rounds.”

“Training with SugarHill has helped me develop as a person and a boxer,” Whittaker told ESPN.

“I’ve only trained with him for six weeks, so just think how much better I will be after six months, or two years.

“I’ve trained alongside the Dirrell brothers [Anthony and Andre] and a couple of Russian boxers who are highly ranked. What I like about training in America is the culture they have over there in boxing gyms. They all want a piece of you, to take your head off in sparring. Sometimes in the UK gyms are a bit too friendly but over in the U.S. it’s sink or swim. It’s taken me out of my comfort zone and it’s helping me learn different styles quickly, as well as about the insects in Miami.”

Whittaker, who calls himself ‘The Surgeon’, is not totally certain which weight category he will be competing for titles in but wants to do it as quickly as possible.

“You have champions, contenders and newbies like me. I just have to be as active as possible in the first year, get comfortable under the lights, and then I want a world title as soon as I can. I’m not getting any younger.

“People like Devin Haney and Shakur Stevenson have won world titles at the lighter weights at a relatively young age. If you look at my weight category, Artur Beterbiev and Dmitry Bivol have all the belts between them and are really good. There’s a backlog and you have the likes of [English fighters] Joshua Buatsi, Anthony Yarde and Callum Smith waiting for a shot. It’s about timing, as well as talent.”

Whittaker is good friends with Galal Yafai, who won a gold medal in the flyweight competition at last year’s Olympics.

“We’re good friends, we’re from the Midlands, and have a joke with each other,” Whittaker told ESPN.

“We’ve spent half our lives together boxing for the national team as amateurs and the Olympics changed our lives. He fights at the baby weights but the way he’s moving he will probably fight for a title before me, I’ll give him that one!”

How Top Rank signed Xander Zayas, their youngest prospect ever ‘Remove all doubt. Believe in yourself’: Claressa Shields reflects on her Olympic journey 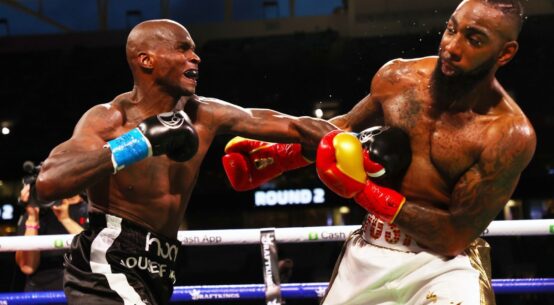