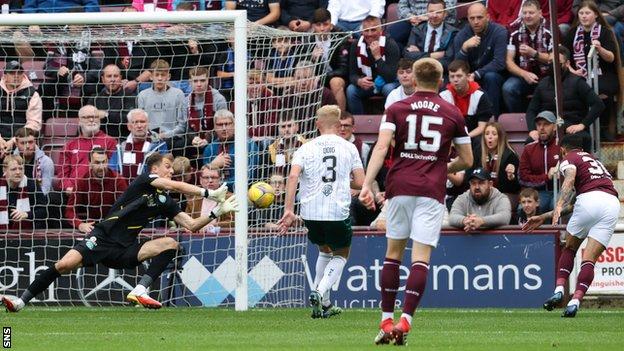 Hearts and Hibernian failed in their bids to reclaim top spot in the Scottish Premiership after a fierce Edinburgh derby ended in a stalemate.

Both goalkeepers pulled off fine stops in a closely-matched contest at Tynecastle to keep the scores level and maintain both sides’ unbeaten starts to the league season.

The draw leaves both capital clubs on 11 points, one behind leaders Rangers, and it means Hibs are unbeaten in their past four visits to Tynecastle.

Not since May 2018 had Hearts beaten Hibs at Tynecastle. Yet, despite their struggles to get the better of them on home turf, they had chalked up victories at Easter Road, and even at Hampden while a division below their rivals.

And early on, the main threats were coming from Robbie Neilson’s side as they looked to leapfrog their rivals in the league.

Ben Woodburn ignored the attention of five white shirts to send a pot-shot just over. Liam Boyce’s header missed the target. Stephen Kingsley met a corner before his goal-bound effort was cleared. And a rasping Mackay-Steven shot was pushed away.

Hibs were having most of the ball, but Joe Newell’s cross which unexpectedly hit the top of the bar was their only real opportunity of the opening exchanges.

However, when they began to look after the ball better, the chances arrived. Boyle thumped in a long-range effort which Gordon palmed away, before the goalkeeper tipped around a post after the forward’s frightening pace had stretched the defence.

The game was finely poised, and within a minute both sides had huge chances.

Hibs’ Magennis found space but his close-range shot was weak. Then Mackay-Steven twice forced great saves from Macey – the first from point-blank range as the Hearts winger broke into the box.

Mackay-Steven had been Hearts most dangerous player, but that was his last say in the game as he went off on the hour mark. His replacement, Josh Ginnelly, soon directed a header on target which Macey pushed away.

Hibs had been very much second best since the break but, just as Hearts thought they were on top, they needed their goalkeeper to bail them out.

Moments after Alex Gogic drove a left-foot shot narrowly past, Kevin Nisbet’s cutback found Magennis, but Scotland goalkeeper Gordon, at full stretch, managed to get his fingers to his skidding effort to divert it wide. A stunning stop.

The back and forth action continued right to the end. Nisbet volleyed wide for Hibs. Then Macey had to pull off another stop, this time from his own captain Paul Hanlon, who got into a mess trying to clear a cross and skewed towards his own net.

Nisbet and Megennis both forced further saves from Gordon as the desperation to find a winner continued, but in the end both had to settle for a point.

Man of the match – Ben Woodburn

It’s been a good start to the season for both sides, and the derby showed there’s little between them.

Hearts have found two gems in Woodburn and Beni Baningime, and debutant Barrie McKay showed flashes of what he can add. But Gordon again was the hero for his side.

Hibs had their moments but were under more pressure than Jack Ross would have liked for much of the game. But, they showed a resilience and had chances to claim the three points, and are now four games unbeaten at the home of their rivals.

Hearts manager Robbie Neilson: “I thought it was a very entertaining match. Very exciting, end-to-end – I quite enjoyed it.

“There’s a wee tinge of disappointment that we didn’t take the three points but it shows how far we’ve come in the past 14,15 months.”

Hibernian head coach Jack Ross: “I genuinely enjoyed it. Both sides had several opportunities. Both goalkeepers were terrific.

Hibernian are at home to St Mirren in the Scottish Premiership on Saturday, 18 September (15:00 BST), while at the same time Hearts are away to Ross County.