Simply put, it was the fight of the year.

Nothing else really comes close to what happened Saturday night inside the Top Rank bubble at the MGM Grand Conference Center in Las Vegas, as Jose Zepeda and Ivan Baranchyk traded eight trips to the canvas. And then, with one perfectly placed Zepeda left hand in the fifth round, it ended suddenly and violently, with Baranchyk laid up on the canvas for several minutes before walking out of the ring.

There are ring wars, and then there was this bout. The action began in the first round with Baranchyk (20-2, 13 KOs) coming out of the gate quickly, swinging from his heels with all his might. He utilized his left hook, which backed up Zepeda immediately, and then used an overhand right to floor Zepeda for the first time in the opening round. Later in the first, a left hook knocked Zepeda down a second time.

Round 1 initially seemed to set the tone for Baranchyk to run away with the fight. Instead, it turned out to be the start of an incredible pace and volume of punches in a back-and-forth affair.

In the second round, Zepeda returned the favor by scoring his first knockdown. But there wasn’t any respite for either fighter, as Baranchyk landed a booming right hand with his back to the ropes that had Zepeda down a third time.

The third round saw no break in the mayhem, either, as Baranchyk was sent to the canvas a second time. For as much punishment as Zepeda was absorbing, he seemed to recover a bit better from the heavy punches that both boxers exchanged throughout. It was around this stage that Zepeda started to find his bearings, and for all the pressure of Baranchyk and his punching prowess, Zepeda was actually on steadier legs as he began to neutralize the raw power of Baranchyk with his own precision counterpunching.

Zepeda’s left hand was his favored weapon of choice, and in the fourth round, it once again had Baranchyk looking up at the lights, evening the knockdowns at three apiece. There was no doubt that while Baranchyk was the stronger and more physical fighter, he was getting sapped of his energy more so than Zepeda, who kept surviving the oncoming rushes of Baranchyk.

Baranchyk was still plenty dangerous going into the middle stage of the fight. After a fourth round that shaped up as the most uneventful round of this memorable battle by default, Round 5 served as the culmination of everything.

Another right hand sent Zepeda into the corner, where he was held up by the ropes. With that, referee Kenny Bayless ruled it a knockdown and proceeded to give Zepeda the mandatory eight count for his fourth knockdown.

At this juncture, it looked like the momentum had swung once again back in favor of Baranchyk. But just seconds later, with one perfectly placed left hand from Zepeda, Baranchyk crashed awkwardly to the canvas, his legs folding underneath him. This wasn’t just a knockdown; this was a knockout — as chilling and as brutal as you’ll ever see, the beauty and violence of boxing in full display with one shot.

There really was no need for Bayless to administer another eight count for this eighth and final knockdown — Baranchyk was out cold. The fight ended at 2:50 of the fifth. While Zepeda could breathe easy overcoming this harrowing experience, there was great concern for Baranchyk, who was prone and unconscious for a good spell, before eventually being whisked away to a hospital for observation.

Instant reaction: 2020 will be remembered for many things. When it comes to boxing, at the top of the list is Zepeda-Baranchyk, which was a five-round battle that won’t soon be forgotten. When it comes to fight of the year, shut down the polls: It’s this fight, by a landslide.

One of the best fights I’ve seen since Foreman-Lyle. Plain and simple. #ZepedaBaranchyk

In the beginning, as both men traded trips to the canvas, it was reminiscent of the 1997 battle at Madison Square Garden that took place between Prince Naseem Hamed and Kevin Kelley, a bout that saw Hamed’s raw power end things in four rounds.

This fight was a bit longer, and it actually had more sustained action. Every round featured at least one knockdown, including the vicious one-punch knockout from Zepeda, which was as frightening as it was breathtaking.

As boxing returned in the summer, there has been a cadre of forgettable fights, designed to pad records and lead to other more meaningful contests down the line. Zepeda-Baranchyk, which was a junior welterweight title eliminator, was expected to be one of the highlights of the remaining schedule in 2020. It was a matchup that actually had some meaning to it — two world-class contenders meeting up without a belt on the line, but tangible stakes certainly hanging in the balance.

And something rare happened in the heavy hype that often comes with boxing — it actually under-promised and over-delivered. When was the last time that occurred in boxing?

Unfortunately, because of the current conditions, almost nobody can claim that they were there. But everyone will remember where they were when they witnessed the beautiful brutality.

Boxing intelligently and strategically over 10 rounds, junior lightweight prospect Gabe Flores Jr. remained undefeated with a clear-cut unanimous decision victory over veteran Ryan Kielczweski. The bout didn’t have much in the way of two-way action or sustained exchanges, but it was instead highlighted by the skills of the 20-year-old Flores.

In the first round, a counter left hook from Kielczweski momentarily stunned Flores, a native of Stockton, California. But Flores (19-0, 6 KOs) was quickly able to regain tactical control of the bout by moving around the ring and picking his spots offensively. Over the nine rounds that followed, Kielczweski landed an occasional punch but never mounted a consistent attack.

This fight had a familiar pattern for those who have seen Flores fight before. Flores is a well-schooled technician but doesn’t have much in the way of knockout power; throughout the fight, Flores was moving and boxing, and Kielczweski wasn’t able to do much in return.

He was cut, bruised and bloodied, but heavyweight hopeful Guido Vianello was able to stave off the first defeat of his professional career against the raw but hard-hitting Kingsley Ibeh. After six rounds, two judges had this fight scored 57-57, while the third had it 59-55 for Ibeh.

While this fight was a dead heat on the scorecards, it felt like a victory for the heavy-handed Ibeh (5-1-1, 4 KOs), who makes up for a lack of technique and pure precision with strength and power. Early on, Ibeh cut Vianello over the left eye with a jab, and this was no minor nick; it was a significant gash, and it began bleeding profusely.

Time and time again, Ibeh was able to stun Vianello (7-0-1, 7 KOs) with his wide punches. Vianello was buzzed several times by Ibeh, who was making his third appearance inside the Top Rank bubble. Vianello was able to rally a bit late as Ibeh got tired, but Vianello never did enough to truly turn the momentum of this bout.

For Vianello, Saturday’s effort showed that he might be more suspect than prospect. On the other side, Ibeh showed that he’s a solid test for any young heavyweight.

In his second professional bout, featherweight Duke Ragan was taken the four-round distance by John Moraga and boxed his way to a rather dull decision. The fight was lacking in any real drama or entertainment, but it was never in doubt, as Ragan pitched a shutout, winning 40-36 on all three cards.

On Aug. 22, Ragan (2-0, 1 KOs) scored a first-round knockout of Luis Alvarado in eye-opening fashion. On Saturday, he was more or less content to just stick behind his jab and box his way through this bout. Moraga (1-2, 1 KOs), who unsuccessfully challenged Demetrious Johnson for the UFC flyweight championship in 2013, returned to boxing from MMA for his second pro bout since 2012. Moraga took this fight on three days’ notice. While he never really threatened Ragan, he did prove to be durable.

In a solid junior lightweight contest between two Puerto Rican boxers, Frevian Gonzalez and Carlos Marrero III battled over four competitive rounds. But the cleaner and more effective work came from Gonzalez, who won by majority decision with judges scoring the fight 38-38, 40-36 and 40-36.

Gonzalez (4-0, 1 KOs) was the steady aggressor throughout this bout, switching frequently to a left-handed stance as he moved inside. Gonzalez’s work was consistent as he went to work to the body of Marrero (2-4-1) with both hands. But to his credit, while he didn’t match the offensive output of Gonzalez, Marrero never showed any signs of backing down.

The superior work rate and steadiness of Gonzalez ultimately carried the day.

It was a short bout between heavyweights Mitchell Sipe and Jimmy Barnes, who wasted no time in throwing the hardest punches they could muster at one another. It was quickly clear that Sipe’s were landing harder, and it didn’t take long for Sipe to earn a result — a first-round TKO in just 43 seconds.

Sipe (1-0, 1 KOs) was making his pro debut, and at 248.9 pounds he was significantly outweighed by Barnes (1-1, 1 KO), who came in at 290.6. But as they exchanged punches early on, Sipe’s salvos hurt Barnes and sent him down in the early seconds of this contest.

After getting up, the two men continued to trade haymakers, and just like their earlier exchange, Barnes was buzzed again. Referee Robert Hoyle stepped in and quickly made the decision to stop the fight in its earliest stages.

Featherweight Haven Brady Jr. made a successful pro debut, as he scored a fourth-round TKO of Gorwar Karyah. It was an awkward and ugly affair at times, with Brady penalized a point for low blows in the second round after multiple warnings and Karyah docked one himself for excessive holding two rounds later.

But eventually the overall skills of Brady took over, and he began to break through the clutching and holding of Karyah (2-2, 2 KOs). In the fourth round, Brady began to land more hard right hands that hurt Karyah, who early on had proved to be an elusive target

As Brady settled in during the fourth round, he began striking Karyah repeatedly while Karyah’s back was on the ropes. Eventually, it was too much in the eyes of referee Russell Mora, who called a halt to the action at 2:27 of Round 4.

In the opening bout of the night at the MGM Grand Conference Center, welterweight JJ Mariano made quick work of Matthew Reed, stopping him in under 90 seconds in Round 1.

Reed (1-1, 1 KOs), who came in a couple of pounds over the weight limit on Friday afternoon, was struck by a left hook as he stepped inside. Reed hit the canvas, and as he rose, he was on shaky legs. Mariano (3-0, 2 KOs) peppered Mariano with quick punches that further dazed Reed.

At that point, referee Robert Hoyle waved off the fight at 1:27.

Pound-for-pound rankings: Did former No. 1 Vasiliy Lomachenko move up after win? 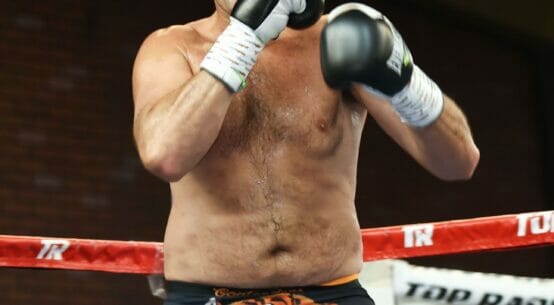