After falling to Rafael Nadal in the Round of 16 at the Australian Open, Nick Kyrgios reflected on an emotional start to the season and the recent progress he has made on and off the court.

The 24-year-old pushed World No. 1 Nadal to a fourth-set tie-break in front of a vocal crowd at Rod Laver Arena, but was disappointed not to be able to level his ATP Head2Head series against the 2009 champion at 4-4.

“I’m shattered to have lost tonight… These are the matches that I want to win the most,” said Kyrgios.

You May Also Like: Nadal Rises To Kyrgios Challenge, Books Thiem Clash In Melbourne

Having started the 2020 ATP Tour season with a run to the semi-finals at the inaugural ATP Cup with Team Australia, Kyrgios entered the Australian Open with a 3-1 record and a growing level of support from the home crowd.

The six-time ATP Tour titlist impressed fans throughout his campaign at Melbourne Park, securing wins against Lorenzo Sonego and Gilles Simon in his opening two rounds.

But the Canberra native showcased the best of his abilities and an impressive fighting spirit in one of the matches of the tournament, shrugging off the disappointment of failing to convert match points in sets three and four to outlast Karen Khachanov in a final-set tie-break on Saturday.

“I feel like I’ve made progress as a human. A tennis player… I want to keep going in this direction, for sure,” said Kyrgios.

It was clear to see as Kyrgios entered the court on Monday evening that the news of NBA legend Kobe Bryant’s passing was at the forefront of his mind.

Kyrgios entered the Rod Laver Arena wearing Bryant’s LA Lakers jersey and had tears in his eyes in the moments before the first point of the match.

“I never met Kobe. But basketball is practically my life,” said Kyrgios. “I watch it every day. I’ve been following it for as long as I can remember.

“When I woke up to the news, it was pretty emotional. It was pretty heavy, like, all day. Obviously, I was having basketball on at my house, watching the games. I was heavy. Yeah, it’s just tough. It’s horrible news.”

Kyrgios took inspiration from Bryant during his four-set loss to Nadal, thinking about the five-time NBA champion as he battled from a break down in the fourth set to force a tie-break.

“If anything, it motivated me. If you look at the things he stood for, what he wanted to be remembered by, I felt like, if anything, it helped me tonight,” said Kyrgios. “When I was down a break in the fourth, I was definitely thinking about it. I fought back.

Bryant’s tragic death comes during a devastating period for Kyrgios’ home country, as communities across Australia continue to suffer the effects of widespread bushfires.

Kyrgios inspired many of his fellow players and the wider tennis community to come together and support bushfire relief efforts, pledging to donate AUD $200 for every ace he hit during the Australian summer. The 23rd seed landed 25 aces during his match against Nadal, raising AUD $5,000.

“If anything, [the bushfires] did fuel me and made me play harder,” said Kyrgios. “They’re still going, everything is still going.

“The last month for me has been pretty hectic, pretty emotional. I’m pretty tired. I want to try to continue to help where I can.”

Brain Game: Djokovic Dominates In His Domain To Dismiss Tsitsipas 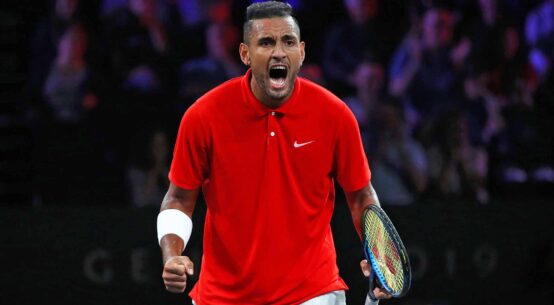 Win A Signed Racquet From Dimitrov, Wawrinka Or Zverev