Skip to content
You are here
Home > Football > Leeds 0-3 Liverpool: Fabinho & Salah hint at Liverpool being back to best – Stephen Warnock

I have been waiting a long time for the kind of Liverpool performance we saw in their victory against Leeds United on Sunday.

In terms of results, Jurgen’s Klopp’s side have made a very positive start to the Premier League season with three wins and a draw, but it is the way they are playing that is the most encouraging sign for me, and this was another hugely impressive display.

Harvey Elliott’s serious ankle injury took the shine off a brilliant result at Elland Road, but this was still a reminder of how good Liverpool are when they are at their best. 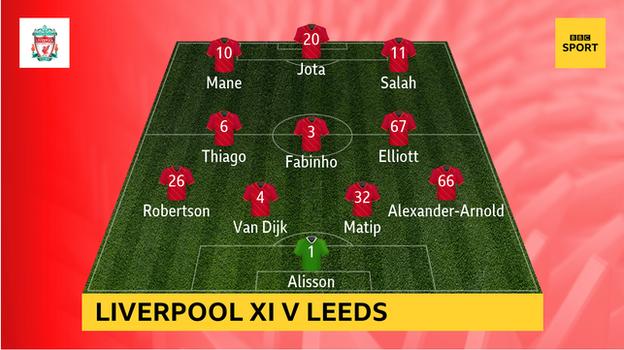 Liverpool’s approach to the game was to nullify Kalvin Phillips, who is one of Leeds’ biggest strengths, by stopping him from getting on the ball.

They did that by having Thiago and Elliott press high along with the front three. It meant that five Liverpool players were in front of most of the Leeds midfielders, and they were not allowing any passes through to them.

From around the 15-minute mark onwards, Leeds just couldn’t get out at all. Liverpool kept winning the ball back high up the pitch, and kept the pressure on.

A big reason it worked so well was having Fabinho back in the heart of the Reds midfield, not filling in at the back like he did so often last season.

Having Fabinho sit in front of the back four allows Liverpool to push their other two midfielders on, because he provides such effective cover to his defenders.

In a way, it is like having three centre-halves – and because he is so tall, the opposition cannot dink the ball into their striker. Fabinho could always cut those passes out when Leeds tried to go a little bit longer.

That’s not what Leeds want to do under Marcelo Bielsa anyway – they want to play out from the back, but they were not allowed to do that at all because of the way Liverpool were set up.

Leeds tried to mark them man for man when they were out of possession, but it didn’t work. Liverpool just over-powered them, because they were so much stronger and their quality on the ball was too much for Leeds too.

Elliott’s injury is a big blow because he has already shown he is a key part of Klopp’s plans. To trust him in central midfield against one of their title rivals, Chelsea, and again here shows how highly he thinks of him.

He delivered again too. Elliott played a part in Liverpool’s first goal with his movement out on the right, and he seems to drift out wide a lot. That allows Salah to come inside and gives Trent Alexander-Arnold another option when he is on the ball.

Elliott’s understanding of the game is natural but his tactical awareness is incredible for an 18-year-old, and I Iove the way he plays with such confidence for a teenager too. He is a big talent and I just hope he is back in action soon.

How Van Dijk makes a difference

There were still a couple of occasions when Leeds got through on Sunday, but that is always going to happen with the way Liverpool play. If you do get past their high press, then it can only take one pass to open them up.

But that is no different to when Liverpool won the Premier League in 2020 or the Champions League in 2019 and that’s why Alisson has been so important since they signed him in 2018 – he makes key saves when he is needed, and he did that again on Sunday.

He’s not the sole reason Liverpool have conceded only one goal in their first four league games, though. Having their regular centre-halves fit again has obviously made a massive difference in that respect.

I don’t think Virgil van Dijk is back yet to being the force he was before his long-term injury. There are some one-on-one situations where I don’t think he fully trusts his knee yet, which is totally normal.

What I would say, though, is that even at 70% or 80% Van Dijk is an incredible player to have in your side, just for his presence.

You can see even on set-pieces in both boxes the effect he has on the game and it is great to watch him spraying passes to Alexander-Arnold or Mohamed Salah to set attacks off again.

Another factor in Liverpool’s success so far is that Salah is still scoring, of course. His goal against Leeds means he now has 100 in the Premier League, and he just doesn’t seem to stop.

With Romelu Lukaku and Cristiano Ronaldo, Chelsea and Manchester United have both made noteworthy signings this summer to get the goals to try to win them the title.

Liverpool didn’t have to do that because they have had a consistent goalscorer for the past four seasons now.

I don’t know why people are so surprised or question how Salah keeps doing it – he is world class, that’s why.

He and Sadio Mane both got some rest over the summer, and they needed it. They have come back looking hungry and in a better place, physically and mentally, and we know what good players they are.

A lot of people wrote Liverpool off as title contenders this season because they only signed one player this summer, RB Leipzig defender Ibrahima Konate.

Well, the season they won the league, 2019-20, they only signed Elliott and reserve keeper Adrian the previous summer.

Klopp clearly believes in his squad, and he knows they have got enough quality to win it again.

I do worry about what will happen when Mane and Salah go away to the Africa Cup of Nations in January, but Liverpool will still be up there fighting for the title until the end of the season – I am sure of that.