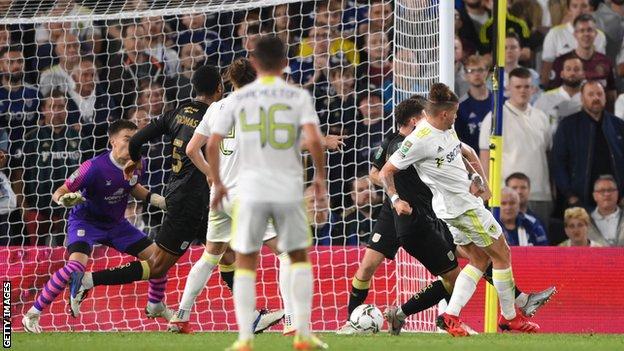 Three late goals helped Premier League Leeds United past League One Crewe Alexandra and into the third round of the Carabao Cup at a sold-out Elland Road.

The hosts, knocked out in round two in the past three seasons, looked set to be frustrated until Kalvin Phillips flicked home a near-post corner with just over 10 minutes of the game remaining.

Jack Harrison then scored twice, with a lovely dinked finish, before slotting past the keeper in added time.

Marcelo Bielsa’s side dominated the game – having 28 shots in total – but lacked a clinical edge until the dying stages.

Leeds, who made six changes from Saturday’s 2-2 draw against Everton, started well with Tyler Roberts having an effort blocked, before Adam Forshaw – making his first appearance since September 2019 because of a hip injury – saw his effort saved.

Harrison, who joined the club on a permanent basis from Manchester City this summer, saw an effort tipped behind, with Phillips sending an unmarked header wide from the resulting corner.

Another summer signing, Junior Firpo, hit the outside of the post with a volley as Leeds failed to find the breakthrough.

It eventually came when Phillips ghosted clear of his marker from a corner, and despite not catching the ball cleanly, did enough to beat William Jaaskelainen – son of former Bolton keeper Jussi – in the Crewe goal.

Harrison, who was perhaps the most guilty of lacking precision in front of goal, sealed the win with a delightful dink over the advancing Jaaskelainen, after good hold-up play by substitute Patrick Bamford, before slotting home when left one-on-one.

Leeds United boss Marcelo Bielsa: “It took a long time to score. We missed a lot of chances in a very contested game. Even though [Crewe] created little, they disputed everything.

“Adam Forshaw is very well prepared. He’s sacrificed a lot in the last two months. If he keeps healthy and progressively acquires the competition’s rhythm he has all the virtues to shine.”

Crewe Alexandra manager David Artell on BBC Radio Stoke: “I thought the lads were terrific and they performed admirably. The fans were magnificent too – they should be the first thing we talk about. You could hear the 1,500 of them among the 37,000 here tonight.

“The first goal was always going to pop the cork, and if there is one disappointment from tonight it is the manner that the goal came.

“Marcelo Bielsa came up to us at the end and said the way we set up was magnificent.” Scotland: How a team of heroes celebrated reaching Euro 2020