Everywhere you turned, there were the memories. In the tunnel, there was Roy Keane telling Patrick Vieira he’d see him out there. By the touchline there was Gary Neville kicking José Antonio Reyes. Just outside the penalty area, there was Martin Keown jostling Ruud van Nistelrooy. Remember? Remember how every man knew when we reached out to claim the throne? Remember when we were kings?

Those pre-Abramovich days when this was the biggest game in English football seem a long time ago now, two decades gone with atrocious haste. Manchester United and Arsenal aren’t even the best sides in their respective cities any more and on nights like Monday it was impossible not to wonder how long it will take them to get back to where they were, whether they ever will get back.

There are two great lies in football. The first, the short-term one, is transition. It’s an excuse made easier by the impatience of so much of football’s culture. Any manager can brush off a defeat or a run of poor form by saying his side is in transition. When the sack comes they can claim they just needed more time. Sometimes it is true. Among the most vivid of all the memories that haunt Old Trafford is the reaction to the 2-1 defeat against Crystal Palace in December 1989. The bedsheet bemoaning “three years of excuses” may be the most famous manifestation of the discontent but the fans en masse were in uproar.

It’s easy now to wonder what might have happened had the board not held its nerve, had Mark Robins not scored that winner at Nottingham Forest in the FA Cup. If memories of that season and an instance when the transition was demonstrably in the right direction incline fans to caution now it is understandable. But often transition is just another word for stagnation.

That season 30 years ago feels particularly relevant now. This is the fewest points United have had after seven games of a league season since then. Such judgments are subjective, but this feels the weakest squad United have had since then, certainly relative to the rest of the league. It’s not necessarily straightforward to tell in the moment but back then there was a clear plan as Ferguson refashioned and professionalised the squad. Can anybody, looking at this squad, at the recent transfers in and out, honestly say they can see a clear policy?

Does anybody have any faith, even if fortunes are splurged, that things will be better in two transfer widows? In four? In six?

Football’s other great lie is that success is cyclical, as though if you’re big enough things will come good if you wait long enough.

Squads have cycles, it’s true, and whoever is in charge of long-term development, be that a manager or a sporting director, must manage the age profile of a team while fighting a constant war with entropy – but those are the details. There is also a macro picture and it’s that that must be of serious concern for United.

A lack of planning, a lack of nous, are beginning to affect the financial picture. United’s latest financial results show a record wage bill of £332m, 43% up on three years ago and 22% higher than the club with the next highest wages in the Premier League, Liverpool. Commercial revenue, meanwhile, has essentially stagnated over the past four years – although it remains 18.5% higher than that of City, who are second in that particular chart. Ed Woodward may be a genius at finding sponsors and partners in every market, and there’s no reason for panic just yet, but slowly underperformance in the league is beginning to have an impact.

After nine points from seven games this season, after 19 goals in their last 21 games, after an awkwardly imbalanced side lurched to another less-than-impressive result, the temptation is to start looking down rather than up. The gulf to City seems unbridgeable, at least in the short term, at least while Pep Guardiola remains in situ – and given how adroitly City’s present owners have planned everything so far, they’re as well placed to manage that transition as any side could be. The reports that Giovanni van Bronckhorst is already being groomed as his successor is indicative of a long-term perspective alien to the vast majority of clubs.

The question now is rather how low United could go. The financial structure of modern football means there’s not going to be another relegation, as in 1974, and given how tightly bunched the league is, 10th isn’t necessarily as bad as it may appear. But United could easily finish behind Leicester City this season, and perhaps West Ham and Everton as well. There are no guarantees even of Europa League football. 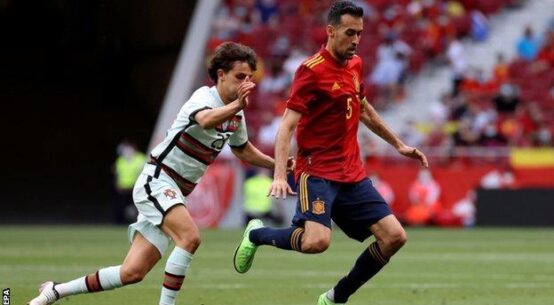 England 3-0 Belgium: How close is Sarina Wiegman to knowing her best starting XI?