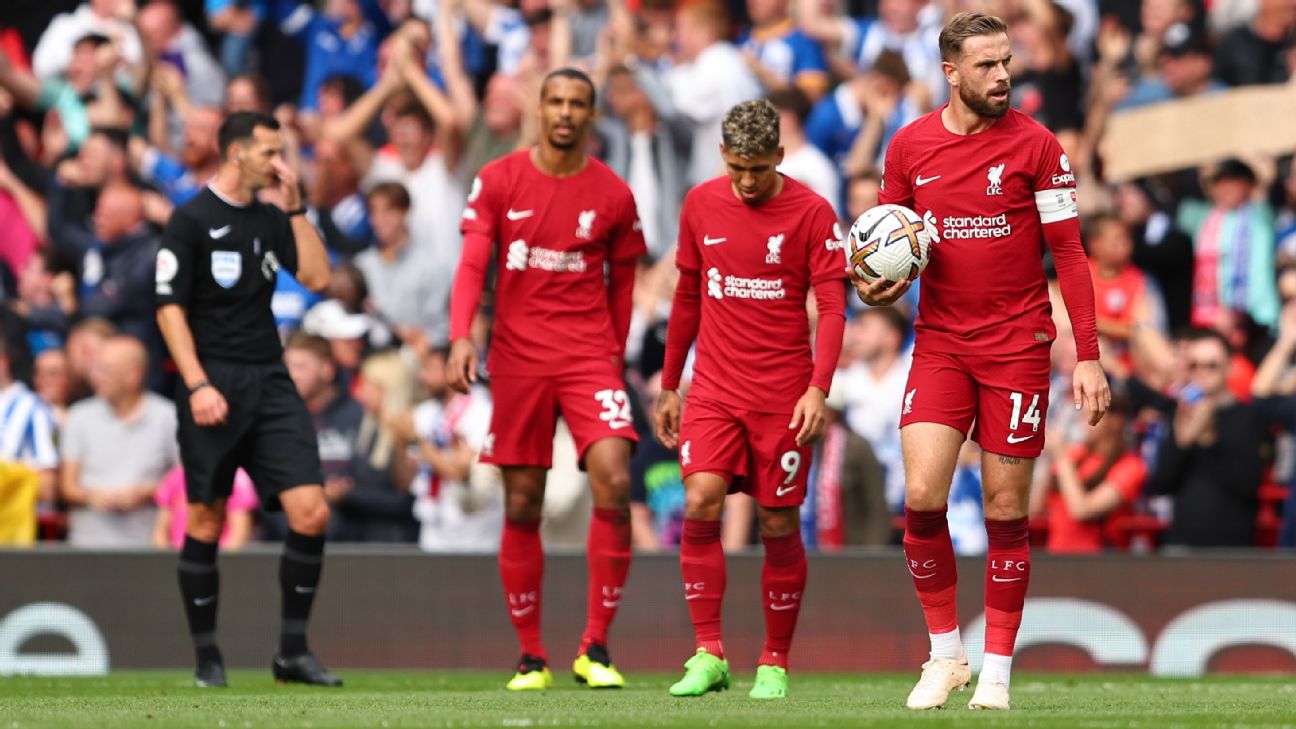 As the Premier League plot begins to take shape, fans will be assessing what kind of season might be in store for their team. There is still plenty of time for struggling clubs such as Liverpool to recover and successful ones such as Arsenal to fade. So how worried should you be? Here is our Worry Index, where a mark of 10 translates to blind alarm down to 1, which means absolutely no cause for concern.

Liverpool, 9 – Jurgen Klopp’s team are probably already out of the title race — 11 points off the leaders Arsenal. Hard to pinpoint the reasons why, but there has been a lack of the old intensity, with even major players like Virgil Van Dijk and Mohamed Salah looking shadows of their normal selves. You would think a squad with so much quality has to bounce back soon, but there is a suspicion that last season’s agonising near-misses in the Premier and Champions League have left a few players a little burned out, emotionally as well as physically. Now they face a battle to even make the top four.

Nottingham Forest, 9 – Rock bottom after a 4-0 drubbing from local rivals Leicester. Impossible to get the blend and harmony right with 23 new faces. Manager Steve Cooper worked wonders to get Forest promoted. It is part of football’s madness that he may be fired five months after promotion, but don’t rule it out. Sad that the party has turned sour so quickly.

Southampton, 8 – The Saints have lost 14 of their past 20 Premier League games including the past three against Wolves, Aston Villa and Everton. They’re yet to keep a clean sheet and lack a reliable regular goal scorer. James Ward-Prowse’s leadership and quality will be vital, but too many others seem to go in and out of a flaky team.

Wolves, 8 – They sacked manager Bruno Lage after a dreadful run which has seen them pick up only one win all season and fail to score in five of their eight games. Perhaps Diego Costa can lead a recovery for whoever takes over. Selling talisman Conor Coady to Everton does not look such a great idea now.

Manchester United, 7 – It seemed as if three wins on the bounce against Southampton, Leicester City and Arsenal had steadied the ship, but the weekend hammering in the derby against Manchester City was a reminder of how much work Erik ten Hag still has on his hands. The first half resembled a surrender. Where was the grit and character and why did United spend £70m on a big-game player like Casemiro to leave him on the bench? Ten Hag’s admission that Cristiano Ronaldo did not come on against City “out of respect for his big career” was strange. The worry is that United face another uphill battle to make the top four.

Leicester City, 7 – Out of intensive care with the big win over Forest. That has taken the heat off Brendan Rodgers. But there must still be worries over such soft defending in other games. The Foxes need to pass stiffer tests before saying they have turned a corner, especially now that 35-year-old Jamie Vardy can not be relied on to provide the goals.

Chelsea, 6 – Despite a first league win for new manager Graham Potter at Crystal Palace, there is still a feeling that Chelsea are in a state of flux. The change of ownership has caused a few shockwaves behind the scenes, and that has been reflected in some erratic results on the pitch, with defeats against Leeds, Southampton and Dinamo Zagreb in the Champions League. Potter’s lack of ego and coaching talent may be exactly what Chelsea need.

Aston Villa, 6 – That 0-0 draw against a 10-man Leeds United heaped further frustration across the worried brow of manager Steven Gerrard, even though it was Villa’s first away point. So far Ollie Watkins and Danny Ings have one league goal apiece and Philippe Coutinho has not provided the spark that Gerrard wanted. No panic yet. Just impatience.

Leeds United, 5 – Jesse Marsch kept Leeds up last season and has made a steady enough start this season. Battling to a draw with Villa while playing with 10 men underlined their continued spirit and togetherness. Only cause for concern was if a debut season in the Premier League started to take a toll on the likes of Tyler Adams, Brenden Aaronson, Marc Roca, and Luis Sinisterra.

Bournemouth, 5 – Caretaker manager Gary O’Neil has stated his case for a permanent appointment with a four-game unbeaten run since the 0-9 humiliation at Anfield. He is getting a good tune from a limited squad, but there is still concern that they do not have quite enough quality to stay out of the bottom three.

West Ham, 5 – The Hammers lost five of their first seven games and frankly looked off the pace in most of them. But at least their finishing improved in their second win of the season against Wolves on Saturday. Jarrod Bowen has taken time to get going after his stellar season last time, and David Moyes has had to bed in new signings Gianluca Scamacca , Thilo Kehrer, and Maxwel Cornet. Can they qualify for Europe again after such a slow start?

Newcastle, 4 – The 4-1 win against Fulham’s 10 men was their first since the opening day, and the revolution under their new Saudi owners will take a season or two. Why worry when money is no object? Because raised expectations mean anything less than a European place next season will look like failure. And there is always anxiety about keeping Callum Wilson fit.

Tottenham Hotspur, 4 – Despite a pretty poor display in losing the North London derby at Arsenal, this has been a useful start for Spurs with 17 points on the board. Antonio Conte’s 3-4-3 system is producing a team with plenty of substance, but perhaps not enough style for the “glory, glory” purists on the Tottenham High Road. They’re lacking an X factor so far.

Crystal Palace, 4 – The Eagles have a lot of good players and an impressive manager in Patrick Vieira, so there will be some worry after chalking up only one win so far ( 3-1 against Villa). Palace have enough silk and steel for another mid-table finish — though Vieira will want a little more than that.

Gab Marcotti and Julien Laurens feel that new Brighton manager Roberto de Zerbi is the perfect fit for the club.

Everton, 3 – A six-game unbeaten run has eased many of the early concerns at Goodison. James Tarkowski, Conor Coady and Nathan Patterson are looking like great signings to strengthen the defence, Alex Iwobi has starred in a new midfield role, and gifted youngster Anthony Gordon has stayed at the club. Scoring enough goals will be their main concern.

Fulham, 3 – Craven Cottage fans will worry because their team have been relegated after both previous promotions, but this time they look a more dynamic, resilient outfit and, after misfiring in earlier top-flight campaigns at Fulham, Aleksandar Mitrovic is among other goals. The 1-4 reverse to Newcastle can probably be put down to “one of those days” as they played 82 minutes with ten men and Mitrovic went off injured.

Brighton, 3 – They may well have shot up this Worry Index after losing manager Graham Potter, who had performed wonders down on the Sussex coast. But new boss Roberto De Zerbi started with an excellent 3-3 draw at Liverpool. If he is smart enough not to tinker too much, the Seagulls might continue to flourish.

Brentford, 2 – Widely tipped for a far more difficult second season in the top flight after a very respectable 13th-place finish last season, Thomas Frank’s vibrant team are again more than holding their own. Only Arsenal and Fulham have beaten them, and Ivan Toney’s England call-up has only lifted the mood.

Arsenal, 2 – Top of the table and turning on the style, with Gabriel Jesus looking like the signing of the season. These are heady times for Gunners fans. Their only worry is can this team keep up the hot pace and become surprise title contenders?

Manchester City, 1 – Hardly a cloud in the sky for Pep Guardiola, except maybe the odd glance at what his old assistant Mikel Arteta is doing at Arsenal. City have not lost a league game since February, and it will be a surprise if they fail to make it five titles in six years. Guardiola may worry a little at how much emotional energy the mid-winter World Cup will take from his players, but they look a class apart. 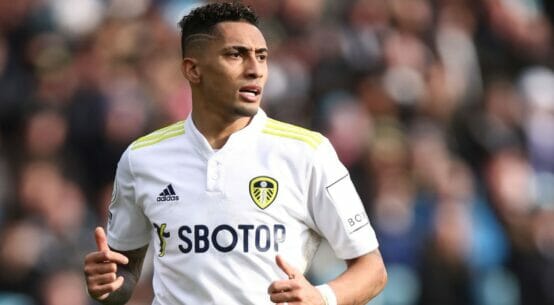 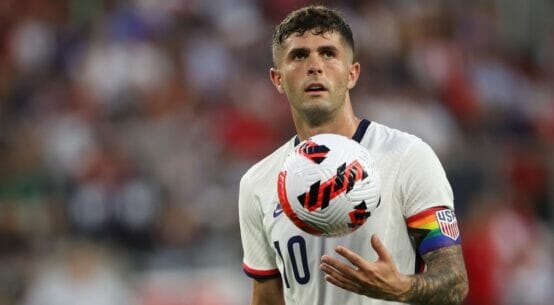 Why World Cup betting is a guessing game for American bookmakers 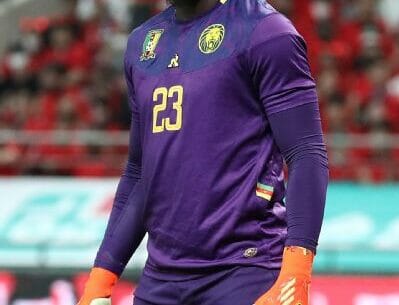