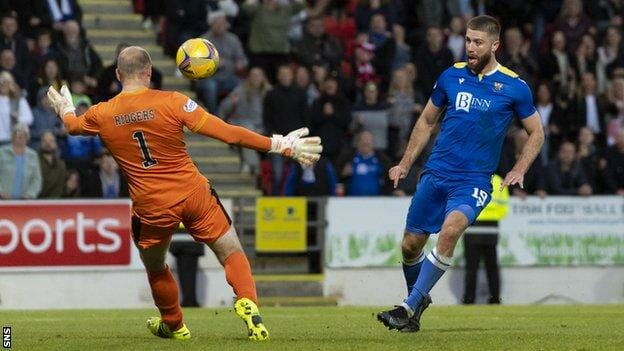 St Johnstone “have a lot of work to do” after securing a 14th successive top-flight season, says manager Callum Davidson.

Saints won 4-0 to complete a 6-2 aggregate victory against Inverness in the Scottish Premiership play-off final.

Stevie May, Cammy MacPherson, Callum Hendry and Shaun Rooney all scored for Davidson’s side.

“We’ve got a lot of work to do. How do make sure we’ve got a good squad because there are a lot of good teams in the league? A lot of teams are spending money.

“We need to make sure we’re up competing just to stay in the league. Kilmarnock are going to come up and they’re going to spend money. Another tough one. That’s just the league and we’ve got to move with it.”

Davidson also said it would be “quite difficult” to keep out of contract goalkeeper Zander Clark.

“If Zander goes on to play somewhere else at a high level, I’ll be absolutely over the moon,” the manager explained.

Inverness had been the better side in the first half but remain in the Championship for a sixth campaign in a row.

With much for St Johnstone to lose, their play was hurried early on. MacPherson was booked for taking out Kirk Broadfoot and Dan Cleary’s rushed pass back sliced wide by goalkeeper Zander Clark.

Inverness midfielder David Carson followed MacPherson into the book after catching James Brown late as the opening half became ever more scrappy.

Saints could not find space in behind the Caley Thistle defence as they had in the first leg and a chance that fell Hendry’s way was snuffed out before the break.

Then, the pivotal change. Glenn Middleton was withdrawn injured by at half-time, heralding May’s arrival.

And Saints’ three-time domestic cup winner made his mark on the final with the opening goal, pouncing on the rebound to strike after Melker Hallberg’s header was saved.

The visitors had most of the second half to respond but soon found themselves two down. MacPherson collected Brown’s pass on the edge of the box and his powerful drive took a nick off a defender past Mark Ridgers.

Inverness had to replicate their feat of coming back from two down in the first leg and Samuels tested Clark before Aaron Doran swiped an excellent chance wide.

And Reece McAlear, who scored twice on Friday, found his way to goal blocked by desperate St Johnstone defending.

While the visitors threw players forward, Hendry peeled off to receive Hallberg’s pass and stay onside. The forward had a clear run at goal and lifted the ball past Ridgers.

St Johnstone were not finished there and Rooney, who scored the opening goal of the play-off final, took Cleary’s pass and produced a carbon copy of Hendry’s finish just two minutes later to secure a resounding victory.

Man of the match – Melker Hallberg

While a handful of Premiership managers have lost their jobs in recent months, Davidson has emerged as the obvious argument for keeping faith with an incumbent, his animated celebrations at full-time exuding both joy and relief.

The last thing he or anyone else associated with the Perth club will want is another relegation fight next term.

Inverness had defied the odds time and again in their three play-off ties – coming from behind to oust Partick Thistle, beating Arbroath on penalties after having two players sent off and scoring twice to peg back St Johnstone on Friday.

But getting a win at McDiarmid Park proved to be a bridge too far for Billy Dodds’ side.

They will start the next campaign as one of the favourites to win the second tier but will have at least one major obstacle in newly relegated Dundee.

St Johnstone manager Callum Davidson: “Probably relief more than anything else. It’s a fantastic achievement from the players. We were in a really dark place November, December. The chairman backed us and we managed to bring some players in.

Inverness CT manager Billy Dodds: “Proud and disappointed. Proud of the players for the season. Disappointed the way it turned out. We played really well first half. I thought we had them.

“The goal changed the game. When they get the goal and then the deflection, we had to chase and then we’re open and they catch us. I think 4-0 was harsh on my boys. We gain experience from it and get ready for next season.” Wolves 2-3 West Brom: Can Nuno Espirito Santo get his team back to winning ways?