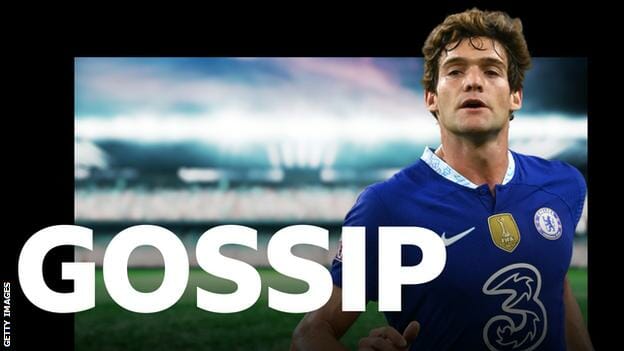 Barcelona remain in talks with Chelsea over Spain left-back Marcos Alonso and are confident of reaching an agreement to sign the 31-year-old. (90min)external-link

Alonso has said his goodbyes to staff at Chelsea‘s Cobham training ground as he looks to seal his transfer this weekend. (Mail)external-link

Everton are set to beat West Ham to the signing of Belgium midfielder Amadou Onana, 20, from Lille. (Mirror)external-link

Tottenham are planning to complete a deal with Udinese for 19-year-old Italian defender Destiny Udogie next week. (Fabrizio Romano)external-link

Barcelona and Netherlands midfielder Frenkie de Jong, 25, is prepared to remain with the Spanish club on a reduced salary despite interest from Chelsea and Manchester United. (Sport – in Spanish)external-link

Leeds owner Andrea Radrizzani has said Chelsea agreed a £65m fee to sign Raphinha before “Barcelona influences” saw the Brazil winger, 25, choose to join the Spanish club instead. (The Athletic on YouTube)external-link

Wolves manager Bruno Lage expects Spanish winger Adama Traore, 26, to stay at the club and be part of his squad for the new season. (Birmingham Live)external-link