Skip to content
You are here
Home > Football > Premier League > US-Iran prepare for group finale; a 5 a.m. ET game worth waking up for; Tuesday best bets 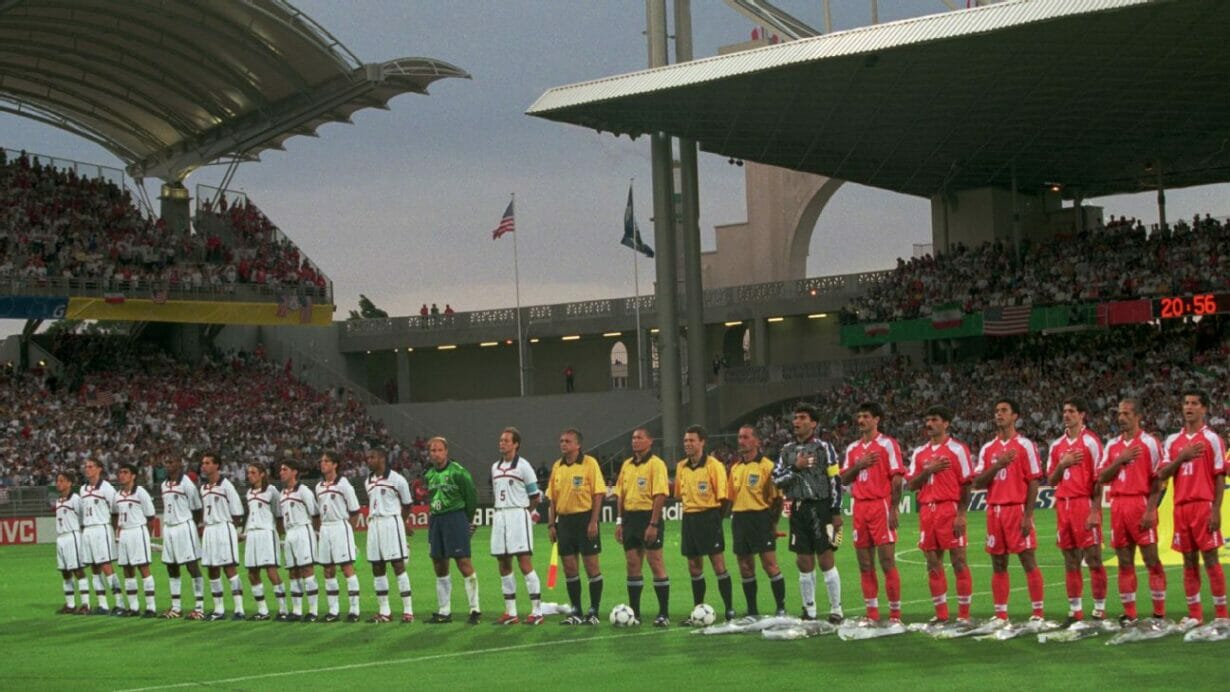 It was a Monday morning full of goals at the World Cup, with the 5 a.m. opener of Cameroon vs. Serbia delivering the drama, and Ghana and South Korea ratcheting up the tension themselves. Plus, the United States men’s national team make their final preparations for a must-win group stage finale against Iran on Tuesday.

Be sure to check in with ESPN throughout the tournament as we bring you the latest from Qatar. Here’s what you might have missed from the Monday World Cup happenings, and a look ahead to what’s next on Tuesday.

It’s been 24 years since the United States faced Iran. It did not go well for the USMNT at France ’98, ending in a 2-1 defeat that eliminated them from the tournament. If manager Gregg Berhalter wants to avoid another embarrassing group stage exit, he’ll need to lead his team to victory on Tuesday at the Al Thumama Stadium.

– How the US, Iran match up on the pitch as tensions rise off it

Much more will be asked of Berhalter and his counterpart with Iran, Carlos Queiroz, though, as this game won’t just come down to tactics and personnel decisions. The geopolitical rivalry between these two countries has loomed large ever since April’s draw, and events in Qatar have done little to defuse that simmering animosity.

Throughout this World Cup, the Iranian team have been asked about the protests in their home country, two months of unrest following the death of a 22-year-old woman while in custody of the country’s morality police, resulting in the deaths of 410 protestors. The US Soccer Federation wanted to show their support for the protestors by scrubbing the emblem of the Islamic Republic from Iran’s flag on social media, which brought a stark rebuke from the country and widespread condemnation. It didn’t help matters that ex-USMNT manager Jurgen Klinsmann criticised Iranian football culture in the wake of their 2-0 win over Wales on Friday, comments that Queiroz called a “disgrace to football.”

The tension that has built up ahead of this game is thick, harking back to that politically charged meeting in the summer of 1998 in Lyon, and the stakes are similar. The Americans’ fate at this World Cup rests on winning this game; anything short of that and they will suffer their third group stage exit in their past six tournament appearances.

Between all that has transpired off the pitch, and the stakes on it, this stands to be one of the most contentious, intense matches of this group stage.

Finally, a 5 a.m. kickoff worth waking up for

This World Cup has gotten off to a slow start. Not in the broader sense, of course, but in terms of each day’s first match. In the six 5 a.m. ET kickoffs so far this tournament, just eight goals have been scored.

Cameroon and Serbia sought to change that up on Monday.

Jean-Charles Castelletto staked Cameroon to a lead on 29 minutes, but Strahinja Pavlovic and Sergej Milinkovic-Savic each scored in first-half stoppage time to put Serbia in front at the interval. Aleksandar Mitrovic struck just eight minutes after the interval to make it a 3-1 lead, only for Vincent Aboubakar and Eric Maxim Choupo-Moting to score in the 63rd and 66th minutes to level the score.

It would finish all square, 3-3, marking just the third time an African nation had ever overcome a two-goal deficit to claim a result (South Africa against Paraguay in 2002 and Ivory Coast against Serbia and Montenegro in 2006). The six goals in 90 minutes made the morning’s coffee superfluous, especially in contrast to the rest of the decaffeinated encounters we’ve witnessed at dawn.

Oh, and the fun didn’t stop when the full-time whistle blew. An hour later, when Ghana and South Korea kicked off at 8 a.m. ET, they treated us to a five-goal thriller themselves: the Black Stars jumping out to a 2-0 lead through goals from Mohammed Salisu and Mohammed Kudus, only for the Tigers of Asia to level the score with a Cho Gue-Sung brace scored three minutes apart. Seven minutes later, though, Kudus struck again, and Ghana left Education City Stadium with a 3-2 victory.

World Cup fan costumes: Supporters go all out
We’ve seen an astounding array of costumes and fancy dress worn by fans of every team at the World Cup, with some truly sensational outfits spotted.

If you’re looking to bet on the World Cup, ESPN contributors Dan Thomas and Dalen Cuff are here to give you key tips on odds, options and futures. Here’s what we have for the Tuesday matches.

Paul Carr: Netherlands go through with either a win or a draw, but they should be motivated to win this game in an effort to win Group A and avoid (probably) England in the round of 16. Having said that, the Dutch were extremely unimpressive against Ecuador, taking only two shots the entire game. I don’t trust them to cover the goal line, and I lean toward Qatar at +1.5 (+135).

Dalen Cuff: The Dutch have yet to play a solid 90 minutes in this tournament — and Ecuador were the better side against them. They will be motivated to win, but I’m not playing this match. It’s tough to find value anywhere, and I like Paul’s thought above, but Qatar have been so bad I can’t put my money on them performing.

Carr: Assuming Enner Valencia plays, I lean Ecuador here. They’ve simply been better than Senegal at both ends through two games, allowing only seven shots — and just one of which was inside 14 yards. Senegal must win to advance, so at some point they’ll open up, which plays right into Ecuador’s hands … er … feet.

Cuff: I’ve been bullish on Ecuador this tournament, and they’ve delivered in both matches. Valencia’s availability is key. If he plays, I might go with a straight win bet. Regardless of their ability to score, they’re a stout defensive group and teams (including the Dutch) struggle to generate chances against them. My favorite play here is Ecuador to keep a clean sheet (+160).

Carr: My favorite bet here is under 0.5 goals in the first half (+170). Things might get weird late in the game, but I think both teams will again start out cautiously, knowing how much one goal can change everything.

Cuff: I’m also on under 0.5 goals in the first half. However, I do think the US will win this match — and I’m not being biased. I firmly believe that, if you took this same American side with their past performances and put them in a different jersey, I’d simply say the US is a better squad than Iran. I’ll go with a straight win bet (+101).

Carr: I’m surprised that under 2.5 goals is even money here. Wales are as good defensively as their reputation, but England also haven’t been great offensively. Even in the 6-2 win over Iran, England had “only” 2.1 expected goals, meaning they just had a huge finishing hot streak in that game. I wasn’t prepared to take the under because I figured it would be heavily juiced, so I love it at even money.

Cuff: The under here has gotten juiced to -125 — and rightfully so. I imagine things will continue in that direction. Wales’ attack is insipid. England’s hasn’t been inspired either, but their talent is obvious. I like England to win to nil (+110).

What else caught our eye

Give it up for Niclas Fullkrug, who got to live every sports fan’s dream in scoring a big goal at the World Cup as Germany fought back for a 1-1 draw with Spain on Sunday. Now, you can relive the goal in Lego form.

Niclas Füllkrug’s equalizing goal for Germany vs. Spain at the World Cup gets the full Lego treatment.

Matches on tap for Tuesday

The host nation has nothing but pride to play for on Tuesday as they were the first team of the 32 to be eliminated, but pride goes a long way. Can they add to their World Cup goals against a robust Oranje team that would top the group — and face the Group B runners-up in the last 16 — with a victory of their own? We think the Dutch make it three wins from three here.

Ecuador have a one-point edge on the always dangerous African side heading into their decider, but either could advance from the group with a win. The seemingly ageless Enner Valencia (who turned 33 two weeks before the World Cup began) has scored all of Ecuador’s goals so far; can someone else step up? As for Senegal, many experts thought the injury to Sadio Mane doomed them to an early exit, but a 3-1 win over Qatar last Friday shows they still have plenty of firepower.

We covered this at the top, but it’s really the ultimate scenario in sports: win or go home. The question is … who will win and who will go home?

Gareth Southgate’s side played to a 0-0 snoozer against the US on Friday that doesn’t hurt their chances of advancing — they have four points from two games, enough to top Group B — but they’ll want to show a bit more life and spark in order to defeat their noisy neighbours. Meanwhile, in what could be Gareth Bale’s last professional game, would there be any better goodbye to the national team than a game-winning goal that beats England and puts you into the last 16? Anything could happen … including that.