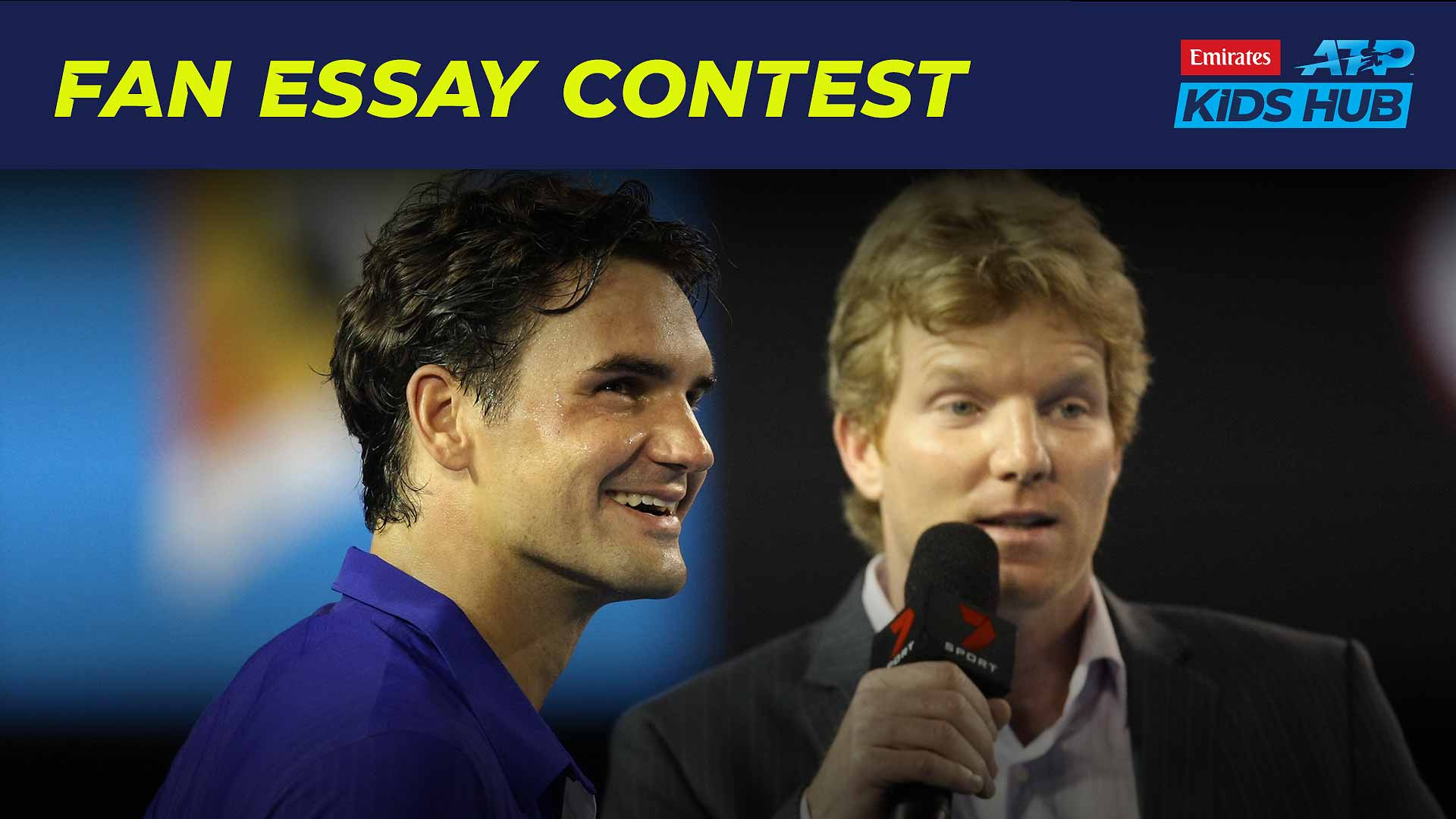 The ATP editorial team had another fun time reading the entries that were sent to us for the second installment of our Fan Essay Contest.

Writers aged 18 and under were challenged to write an essay of 500 words or less on the topic: ‘If you could work any job at an ATP Tour event, what would it be and why?’ The winning entries are featured below.

The Fan Essay Contest will run every three weeks and writers are encouraged to keep sending essays for each new question in the competition. The next topic will be announced later this week. Thanks to all of the talented writers who have entered!

A Day Interviewing On Tour
By Aditya Sharma, 16, Gurgaon, India

When I was a small kid, I sat in front of the television and saw Roger Federer defeat Jo-Wilfried Tsonga in the semi-finals of the 2010 Australian Open. After the match, Jim Courier came on court to interview Roger.

He had the audience out of their seats! I was laughing so hard for the next 15 minutes listening to the funny conversation between them. I realised that there was also a funny and casual side to tennis.

I thought that it would be so cool to be a post-match on-court interviewer. Tennis is not an easy sport. Standing next to such inspiring people who do it every day, with a microphone and having conversations with them, would be an honour to do on the ATP Tour.

I would ask them questions about their daily life and experiences. I’d get to know the human side of them and their struggles, achievements and thoughts. There are so many things that I have learned about the players through their on-court interviews. It gives an insight into their lives and all of their achievements that inspire us.

Another exciting experience of being a post-match interviewer is that you get to travel around the world to illustrious ATP Tour events. You’re in the action at the grandest ATP Masters 1000 stages like Madrid, Montreal, Monte-Carlo and Miami.

I imagine talking to a player like Roger, who has won 103 Tour-level titles including 20 Grand Slams, and Stan Wawrinka, who has three Grand Slam titles, a Masters 1000 trophy and has defeated a World No. 1 player in all of his major finals. Or to players like Andy Murray and John Millman, who have shown us that a career after threatening injuries is still possible.

I imagine myself at the Swiss Indoors Basel and going on court after Roger won his match, asking him questions and maybe having a laugh as well. Who knows who else I’d get to meet? Maybe Rafa in Barcelona? Thiem in Vienna?

Many legends of the sport like Courier and John McEnroe have turned to on-court interviewing after ending their illustrious careers. This shows their affection for the game that they love and cherish. Maybe I’d get the chance to meet them on the job as well, learn from them and maybe even get an autograph!

This job offers more than interviews. It offers an opportunity to learn, observe, meet various shareholders and become part of the ATP Tour.

You May Also Like: Announcing Our First Fan Essay Winners…

A Lens Into The Action
By Zara Vellani, 15, Sydney, Australia

There are highlights in every tournament. Highlights that are brought by the players when they hit a winner, ballkids when they almost dive to make an amazing catch, chair umpires when they put their foot down and Dominic Thiem’s hair this year at the Australian Open. (Get it? Streaks through his hair…highlights…never mind).

The point is that the fans see it all in matches. People talk about it and sometimes it even makes the news! However, it is crucial to understand that there is more than what meets the eye.

Behind every brilliant match, there is continual effort that extends before and after, as well as throughout the whole tournament. So much support and effort is provided by countless staff who no one knows about. I think that it is vital to recognise these people who dedicate so much time without being in the spotlight.

If I were an employee at an ATP Tour event, I would probably like to be one of those people.

More specifically, I would like to be a cameraman (or camerawoman in my case) or videographer at tournaments. Everyone knows that there are cameramen, but these unsung heroes are the reason that people can enjoy tournaments all over the world. I think that these employees are extremely special because they are working in an environment where they are so close to top players, but cannot interact with them. I think that it would require a lot of mental strength and resilience to be a cameraman.

Being so close yet so far, contributing so much to the game and getting little credit for such an exhausting job deserves credit in itself. Having these humble traits is something that I aspire to.

This isn’t to say that I don’t like getting credit where it is due, but I think it’s a good point about how there are hard workers everywhere who make things look very easy. I think that being a cameraman is a good balance of having an important job that you also enjoy. They have a vital role and must stay focussed. Being able to consistently work hard for extremely long periods of time is something that I highly value. Plus, they get an awesome view of the match!

It’s a job which requires a lot of mental strength and a good work ethic. Their critical role in the tournaments is one which requires a massive amount of effort and dedication. I’d be satisfied if I could have half the strength of these amazing people.

If the dream and desire to be a professional tennis player has always stayed with me, the opportunity to work at the ATP Tour is also another dream. I’d love to be there, see players pass by and observe their lives from another perspective. I thought up nine job options and ended up choosing one.

We start with the ball kid. They must all have a great time together and also have the luck of being inside a tennis court, perhaps even being able to witness a final up close in Centre Court at Wimbledon or watching Roger Federer face Rafael Nadal. But they also have many rules. They have to be very focussed on their obligations and cannot simply be spectators watching a match.

A chair umpire and a linesman have a lot of responsibility. One mistake and the players on court can get upset or you have the whole public against you. That would be hard.

A courtesy car driver could be a very relaxing job, but there may not be much interaction with the players and that’s what I’m looking for.

A reporter or photographer is much more attentive to his work than to matches. They’re both very tiring jobs.

A post-match on-court interviewer has to do a perfect job. They must manage the nerves of being able to interview players after the match, prepare good questions and also delight both the public and the player.

A physiotherapist is another option that I considered, but you have to know how to communicate very well with them and understand what pains they feel.

After much thought, I decided that my dream job on the ATP Tour would be as a locker room attendant. You need to have everything prepared spotlessly like the towels for each player, the bottles they need, ice tubs, showers and bathrooms. I would try to interact as much as possible with the players and also observe their routines before and after each game. I’d ask them how their day was and how they handle matches. You can get another perspective of how the players are inside the locker room and also be there to help them.

You will see fearsome players with a strong personality on court, but they can be friendly and talk to you in the locker room. I would have to handle my nerves, but believe they would go away once I started chatting with them.

Firstly, the ball kids get attention when there are positive or funny moments. At the Australian Open this year, Rafael Nadal accidentally hit a ball girl and gave her a kiss afterwards. When you are a ball kid, everyone depends on you to help the match keep moving quickly.

Ball kids have to take a trial for the job and are selected by other people. They have to practise a lot and keep getting experience until they are doing their job in a major match at the Nitto ATP Finals. They must have a lot of stamina, especially if a match goes on for hours on end. It’s a lot of hard work, but it pays off in the end.

I think it’s the best job because you can still be a top tennis player when you get older and rewrite the history books. It might be the start of a fantastic tennis career. There are plenty of positives because you might meet some of your favorite tennis players, be seen on TV and have your family get to watch you. Sinner Soars To Career-High After Washington Title, Mover Of Week