Skip to content
You are here
Home > Tennis > What is the ATP Head2Head Rivalry Between Medvedev & Kyrgios? Nick Kyrgios and Daniil Medvedev will meet for the third time this season on Sunday in a blockbuster fourth-round match at the US Open.

The Australian leads the top seed 3-1 in their ATP Head2Head series, having won their most recent clash in Montreal last month. Medvedev, who is aiming to retain his title in New York, did overcome Kyrgios at the Australian Open in January, advancing in four sets in their only previous Grand Slam meeting.

Kyrgios and Medvedev headline the night session on Day 7 and will step onto Arthur Ashe Stadium at 7:00 p.m. local time.

What Is The Head-To-Head Rivalry Between Nick Kyrgios & Daniil Medvedev?

What time is the fourth-round match between Nick Kyrgios & Daniil Medvedev?

The fourth-round match at the US Open will take place at 7pm EDT/ 1am CEST on Sunday 4 September.

You May Also Like: US Open Day 7 Preview: Medvedev & Kyrgios In NYC Showdown
© Elsa/Getty Images
More stories like this in: Medvedev Sprints To Acapulco Win, Continues Charge Towards No. 1 Roger: ‘I’d Prefer To Be In Rafa Or Novak’s Shoes’ 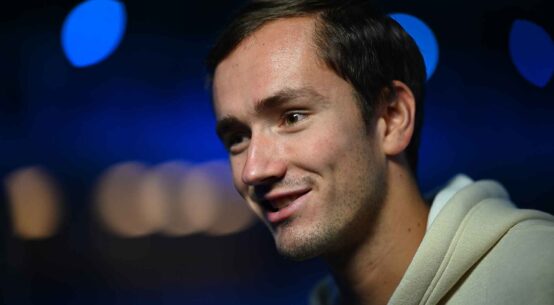 Courier On Medvedev’s Movement: ‘Never Seen Anything Like It’